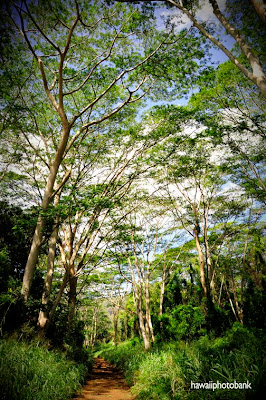 “Kong” is the locals’ name for the pointed peak in Anahola Mountains of east Kauai, since it looks much like the mythical ape, forever watchful seaward. Its real name is Kalalea, meaning “prominent,” even more apropos since it has been featured in movies ranging from South Pacific to Raiders of the Lost Ark—but not in King Kong. 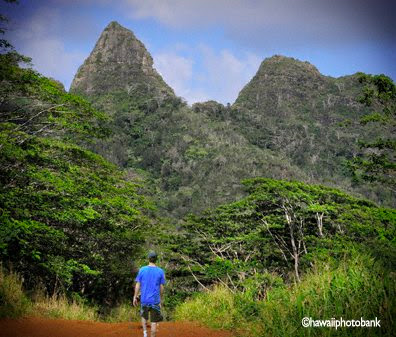 A hunter’s road above Kealia Beach makes for an easy-walking view of the mountain, as monkey pod trees provide a towering overstory with birdsong creaking limbs as a soundtrack. Trekkers can take side routes across a stream gully and attempt to reach “hole in the mountain,” but the trail has become very overgrown since the crescent-shaped opening in the ridge was slammed shut by a slide in the 1990s. This is a leisurely walk, dangerous only because the remote parking is known as a place where bad boys snatch cars. Weekends also bring hunters and a few dirt bikes. So, to commune peacefully with Kong, your best bet is early on a weekday.
Email ThisBlogThis!Share to TwitterShare to FacebookShare to Pinterest
Posted by Trailblazer Hawaii at 12:01 PM