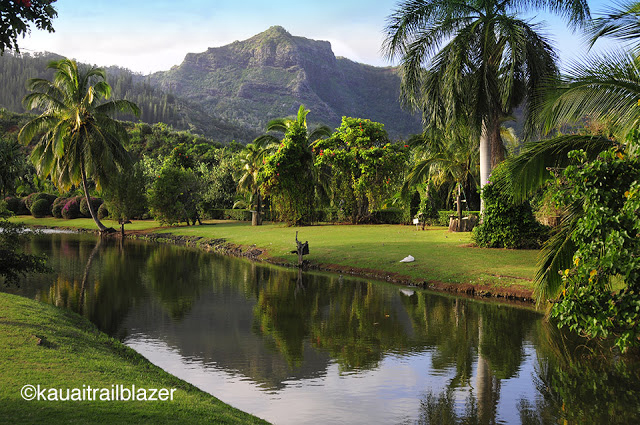 Nounou Mountain, above Kauai's Coconut Coast, looks like the head of a huge Easter-Island-style statue in repose, and locals have always called it the Sleeping Giant. His nose is the summit, with the chin to the right, and a downward sloping forehead to the left.

The summit hike is a not-to-miss half-day adventure: 3 to 5 miles roundtrip, and up to 1,000 feet of gain, depending on which of three trailheads you select. 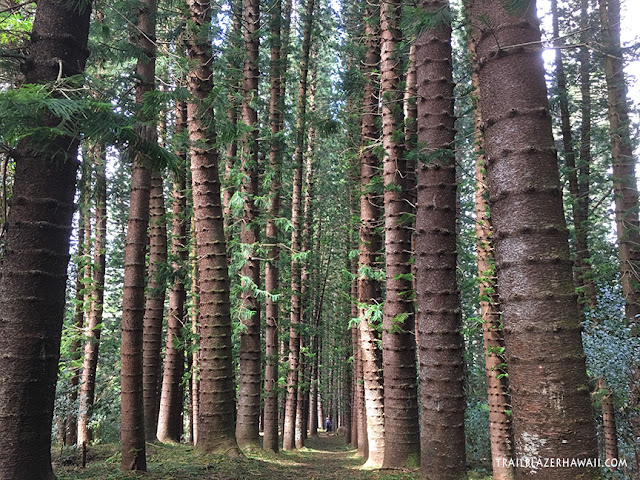 The east side trailhead is the shortest and probably most scenic route. The lower portion penetrates a grove of Norfolk Pines, which were coveted for their use as masts on the sailing ships in the old days.

The west side trail is almost a mile longer, and has ocean views all the way with plenty of sunshine—which can be a good or bad thing. 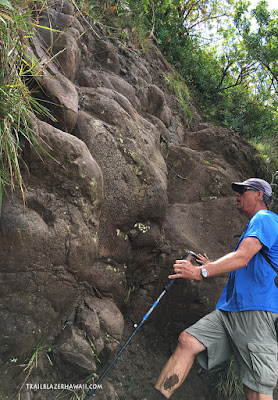 A picnic shelter that is less than a half mile from the top gives up great views, and some hikers think this is the end of the trail. But press on, since the most thrilling and scenic parts are not far. A couple of trail sections require a hands-on approach and may dissuade the casual hiker. 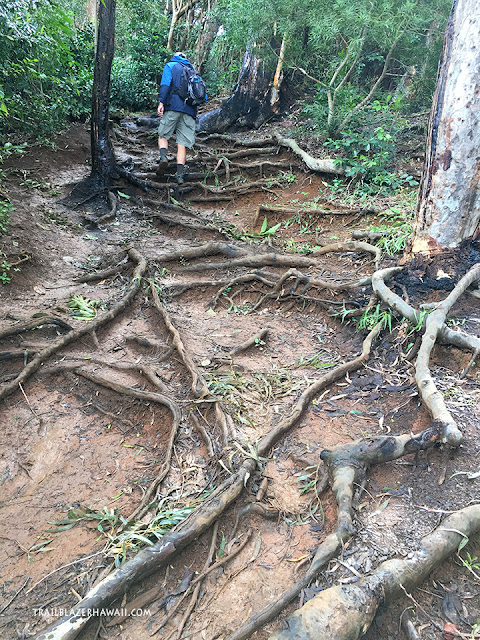 Wet conditions are common on the Sleeping Giant trail. Roots provide a stairway of sorts. 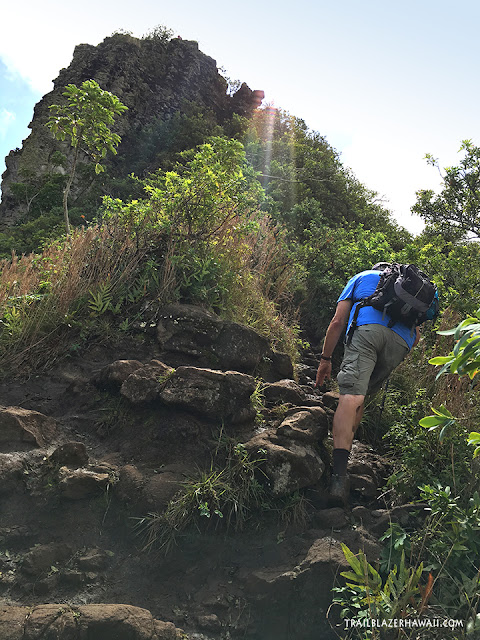 The trail is not dangerous but you want to be mindful of footing and aware that greenery disguises drop-off hazards. 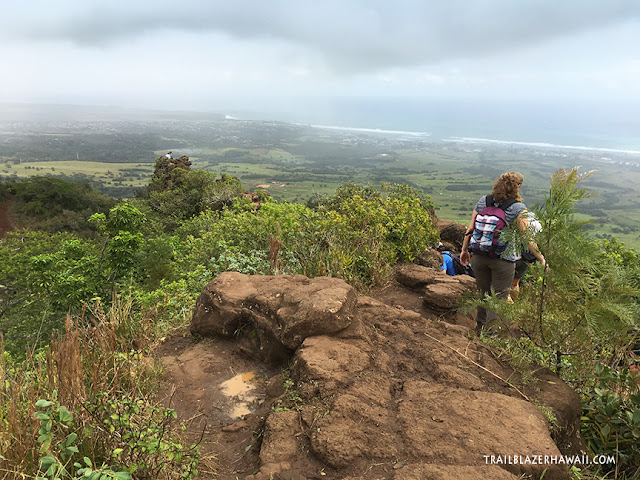 You don't want to slip off this stretch between the Giant's nose and chin (in the distance). And, by the way, many people scramble out to the chin on the way up to the summit and are one-step away from a fatal free-fall in so doing. 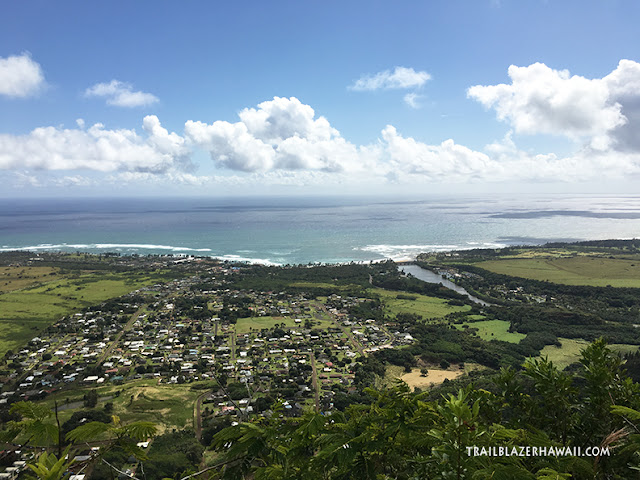 The view from the top. The Wailua River is to the right—the spot from which the top photo in this blog was taken. 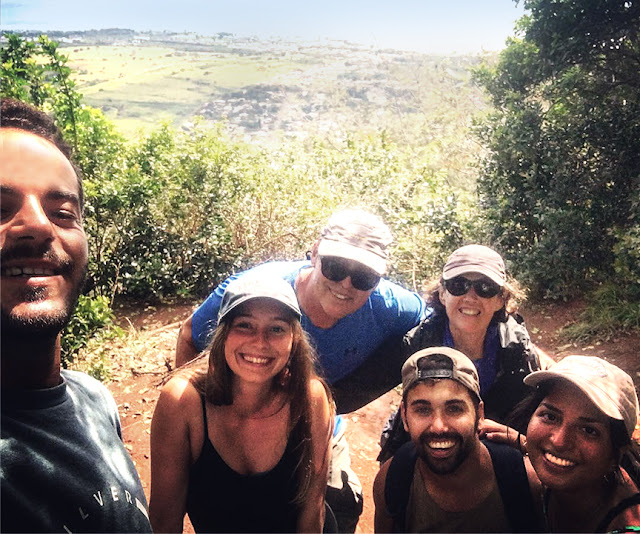 True, the Giant is a fave among locals. But the rest of the world is also well represented: Sharing the picnic view bench at this moment were hikers from Israel, Australia, Peru, and Spain, plus two from the Big Island of Ama'reeka. 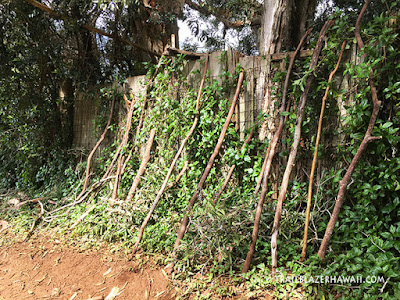 Tips: Hiking poles are a huge help on rainy days, but having two poles is not recommended for this hike since a spare hand is often needed to grab the strawberry guava saplings along the trail for support. Wear dark shorts, since you are bound to take an unexpected sit down, and plan on getting shoes muddy.

Kauai Trailblazer has all the details and directions for this classic hike. For sale on Amazon. 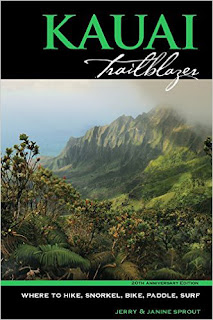