Lost or misplaced your soul? Try looking for it in Hawaii

Hiking the rainforest and snorkeling  the coves by day, then treating every night like a party: That's the way to do Hawaii. But many visitors will discover a side benefit to their vacations, namely, peace of mind. It comes in many forms in the Islands.

The Trailblazer guides include directions to many dozens of spiritual spots on each island. No Worries Hawaii, a vacation planning guide, provides a prioritized summary of the best churches, holy places, and heiaus (Hawaiian temples).

Here are a few places to go where you may find yourself along the way. The 88 Holy Places of Kobo Daishi (above), now part of the Lawai International Center near Kalaheo, are miniature stone houses set on a steep hillside. Brought from Japan and emplaced about a century ago, the Buddhist-inspried shrines were swallowed up by greenery until 'rediscovered' and refurbished by this nonprofit group about a decade ago. At the end of the road on the north tip of the island, the Kauluolaka Hula Temple is the ancient birthplace of hula in Hawaii. On an unmarked trail, the temple consists of grassy platforms below cliffs just above the crashing waves at the Napali Coast. Since the wildly popular Kalalau Trail and Ke'e Beach are nearby, most visitors miss this wonder. Anyone who has driven through Hanalei will likely remember the green-painted Waioli Hui'ia Church, where a gifted choir plays to a packed house on Sundays. 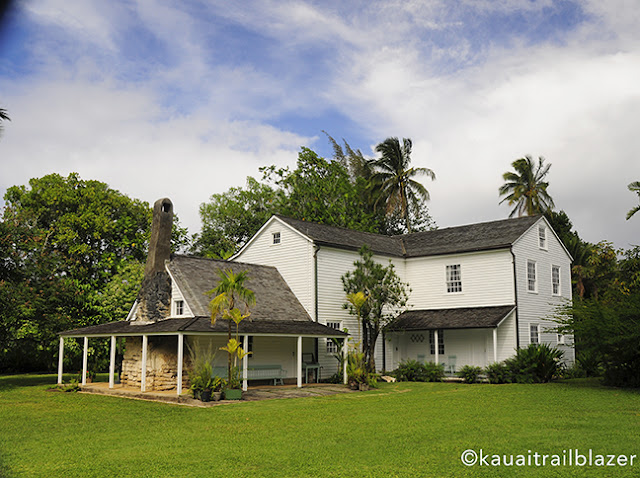 But on any day, don't miss walking across the vast lawn to the grounds of the Waioli Mission House (above), whose buildings date from 1841 and are set next to taro fields and a 3,000-foot-high jagged ridge known as the 'birthplace of rainbows.'  Yow.

Similar to the peaks of north Kauai, the razorback Ko'olau Range hangs above the Valley of the Temples on Windward Oahu. 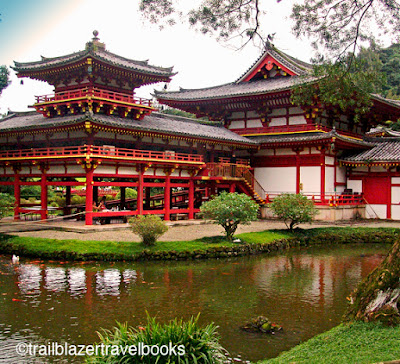 The valley features ornate mausoleums of some of Oahu's well-to-do families, but the centerpiece is the Byodo-In Temple (above). A large koi pond reflects the image of the temple, which is a replica of the 900-year-old original in Kyoto, Japan. Pay your respects to an 18-foot-tall Buddha of the Western Paradise, enjoy a serene cup of tea, and gong a huge bronze bell to rid your mind of temptations (can't hurt to try). 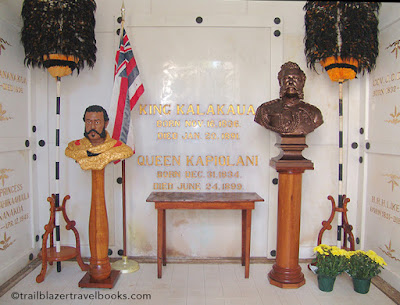 Set off busy Nu'uano Avenue in Honolulu, the Royal Mausoleum (above) is an unexpected sanctuary. Most all the Hawaiian ali'i (kings) are buried here, at the only place in the Islands where the Hawaiian flag flies unaccompanied by the Stars and Stripes. A coral-block chapel with an all-koa-wood interior has been presided over by the same family since the early 1800s. 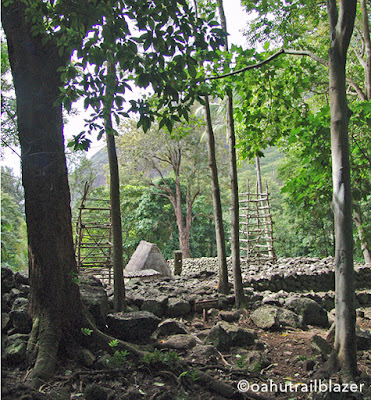 You'll need to pack a sense of adventure to find the Kaneaki Heiau (above), which is up Makaha Valley on the rough-hewn west side. This 13th century restored temple beside a stream is only a ten-minute walk, but it's located within a gated community and only open on certain days—Oahu Trailblazer has the deets on visiting. 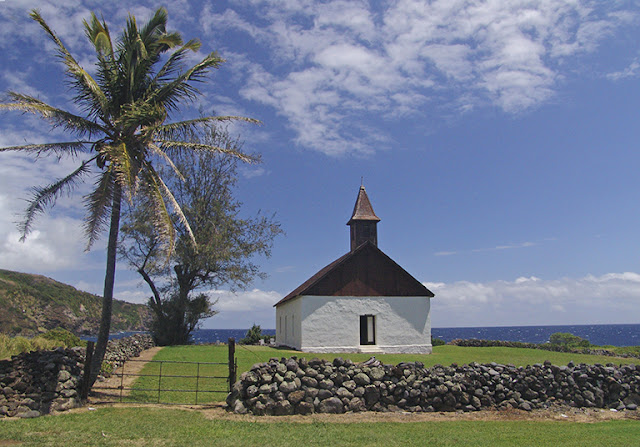 On the delightfully forlorn south coast, not far from the one-horse town of Kaupo, sits the charming Huialoha Church (above). Drive or walk down .25-mile, to grassy flats fringed by cocopalms,  just above wild Haleki'i Bay. The Big Island looms across a channel. Vandals recently did damage to the church, which dates from 1859, but locals have formed a nonprofit group that has brought it back to life in stunning fashion. On the opposite side of Maui, just off the Hana Highway, is Kaulanapeuo Church. Poetically sited on a clearing in the jungle, the church's thick walls rise to a tall steeple that has stood since 1853. Miles north on the windward coast, and centuries older, is Kukuipuka Heiau, which radiates vistas in all directions. Restored in recent years, this modest enclosure is a short walk up a hill very near the Waihe'e Ridge Trail. (BTW: You could spend a whole vacation checking out the quaint churches on Maui.)

Location, location, location. The Wood Valley Temple (below) rests in the verdant Kau Forest Reserve near Pahala, about 40 miles south of the barren expanses of Hawaii Volcanoes National Park. The Dali Lama has visited this tranquil retreat, and you can too. 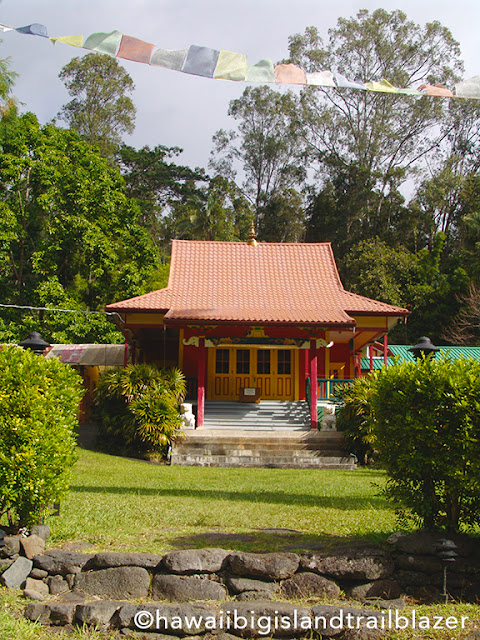 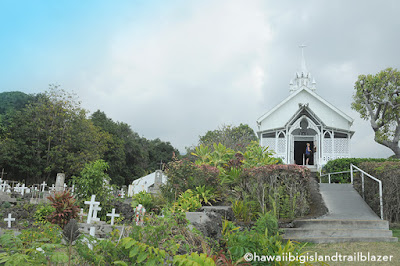 The several-acre garden grounds feature breadfruit, Norfolk pines and flowering shrubs. Near Kawaihae about 50 miles north of Kona, the immense Pu'ukohola Heiau (below) will impart a sense of the majesty of the Hawaiian Kingdom. Ironically, the best look at this National Historic Site is not from park service trails, but from across a little cove at nearby Kawaihae. 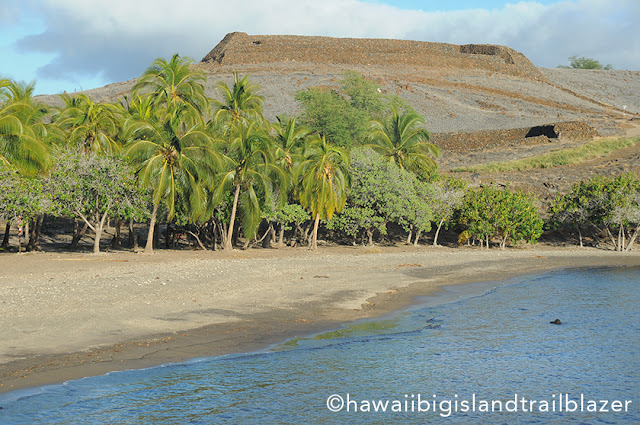 At the heiau's dedication ceremony in 1791, Kamehameha the Great's rival cousin, Keoua, and his retinue were killed in a scuffle. Whether Big K planned the attack, or it transpired from unforeseen events, is open to historical interprepation.

Email ThisBlogThis!Share to TwitterShare to FacebookShare to Pinterest
Posted by TrailblazerHawaii at 5:07 PM