King Kamehameha never had it so good: Have a Royal Hawaiian celebration without breaking the bank. 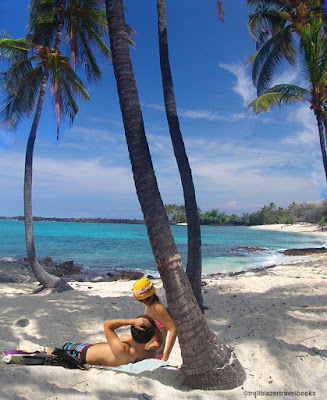 No doubt being the king of all the Islands had its perks—but not near the luxury and creature comforts available these days to us common folk.  And—here's the kicker—if you are planning an event for a group (say six to twelve people) you will be surprised at how affordable a luxury villa  or beachside enclave can be. For the per-person price that a couple pays for a pretty-nice condo or resort room, a group of ten or so can chill at a pad that could be a movie set.

Of course, you can also spend a fortune on a big place that will be a disappointment. One way to make sure you get the 'movie' and not the bummer is to go to Hawaii Vacation Rentals. If you peruse the site, and know Hawaii already, you will see that this team has cherry-picked only desirable locales. They offer more than 200 properties. Booking specialists make sure your rental is a good fit.

So, if you've been thinking of Hawaii,  also think about having a reunion, getting married, or maybe just pooling resources with your friends to create an all-time good time.

Although luxury is a constant, each island has a different personality. Here's what you can expect:

THE BIG ISLAND OF HAWAII

The place to be on the Big Island is South Kohala, where vast fields of rolling black lava hide tropical oases that are home to some of the world's best destination resorts—like the Mauna Lani and Mauna Kea. On the fringes of these resorts are new villas where the gang will feel good about hanging around for days at a time.

Yes, the Big Island is big—larger than all the other islands combined—but the newly constructed Saddle Road makes it easy to go day tripping. On the way to charming Hilo, you pass by the access roads to the world's tallest mountains (measured from their seafloor bases). Big round Mauna Loa is home to weather observatories, while big red Mauna Kea (above) is the sacred "top of the world" for ancient Hawaiians. The peak itself is still pristine, but a side peak is dotted with astronomy observatories. Hawaii Volcanoes National Park, where red-hot lava is spewing from the earth as you read these words, is also doable as a day trip from South Kohala.

Very near to the grounds of the resorts are some of Hawaii's best cultural sites—petroglyph fields, heiaus (temples), and portions of the King's Highway, a historic cobblestone path around the island. Many of the sites are low-key and undeveloped, but you will also find three National Historic Parks. Totally wild Kekaha Kai State Park (top picture) is not far from the resorts of South Kohala. 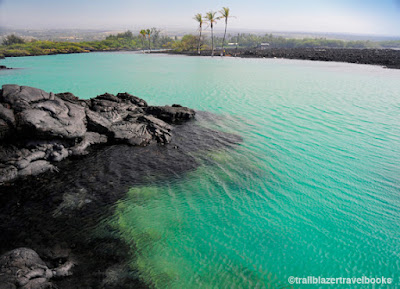 Although the sand is coarse at some South Kohala beaches, the waters are crystal clear, since there is little erosion and no stream runoff. Many of the beaches are wild, like Blue Lagoon, the turtle enclave pictured above.

A location for movies such as Jurassic Park and South Pacific, the north shore of Kauai (Kilauea, Princeville, Haena) has the mind-blowing jagged green ridges and aquamarine waters that fuel most people's tropical dreams. Hanalei, in the heart of the north shore, is Hawaii's capital of low-key cool. Flip flops, board shorts, and bathing suits are high fashion in Hanalei, even for the movie stars and billionaires who frequent the 'hood. 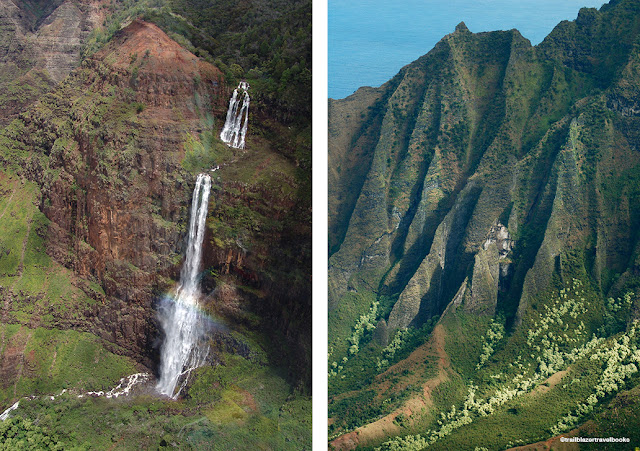 You'll want to take a day to see some of Kauai's eye candy, like Waimea Canyon (above left) and the Kalalau Valley Overlook (above right), which is reachable from the top of the canyon. 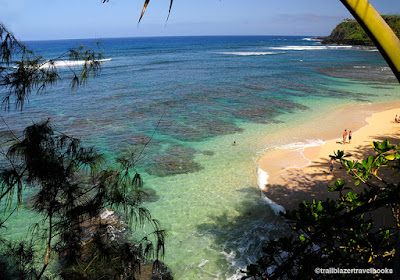 About 12 of Hawaii's top-20 wild beaches (many involve a short hike) are along a 30-mile run of coastline from Anahola to road's end at Haena. The beauty above, Hideaways Beach, is down a rugged trail that is right next to the entrance of the St. Regis Princeville Resort.

Maui is all about Island-style living on the sunny west shores—logging serious beach time in between enjoying fine dining and tourist action. To the north is historic Lahaina and Kapalua (voted best beach in the U.S. by travel magazines). To the south is the swank resort strip of Wailea, which is right next to the family beach parks of Kihei. A dozen or more beaches await. 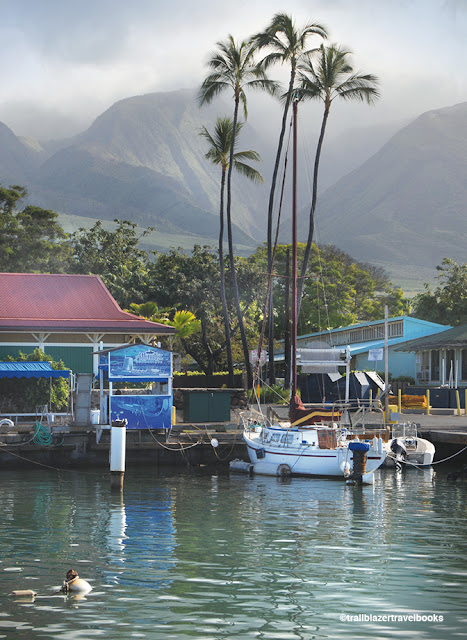 Kamehameha made Lahaina the capital of Hawaii before Honolulu, and its historical roots run deep. A number of whale-watching and fishing tours leave the small harbor. Lanai and Molokai are a ferry ride away. It's a great walk-around beach town with both cultural attractions and all-day action.

Wailea has five beaches, sandy coves all good for snorkeling. Just to the north (there is a walking path) are the three Kamaole Beach Parks (above left), among the best family beaches in the Islands. Just south of Wailea is perhaps Hawaii's most-smashing beach experience, Makena State Park, better known as Big Beach (above right). 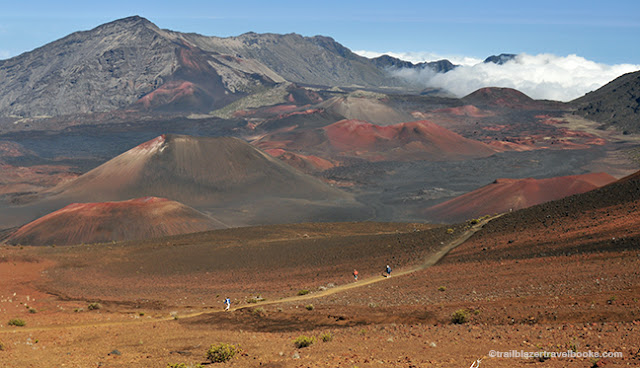 Most people pry themsleves away from the good life to visit the interior of Haleakala National Park, a volcano resting at 10,000 feet above the Pacific. The other must-see attraction on Maui is the serpentine Hana Highway, with its umpteen waterfalls and one-lane bridges alongside a rain forest.

Ninety percent of Hawaii's million-plus residents live on Oahu, but most visitors will be shocked to discover the rural beaches and undeveloped coastline that lie beyond metro Honolulu. Two choice locales are close to attractions, yet offer exclusivity: The first is Diamond Head-Kahala, a ritzy neighborhood with parks, just on fringe of the high-rises and hubbub of Waikiki Beach. The second locale is over the jagged Ko'olau Mountains to the eastern side, called 'Windward.' Lanikai-Kailua offers a buzzing beach scene of its own, but also with easy access to the Polynesian Cultural Center and the North Shore surf scene. 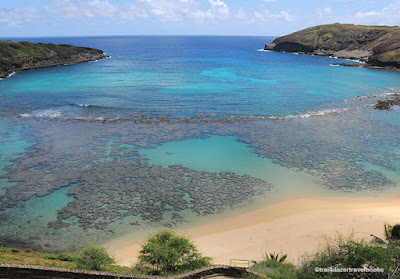 Hanauma Bay (above), the most popular snorkeling venue in Hawaii, is easy to get to from both Lanikai and Kahala. 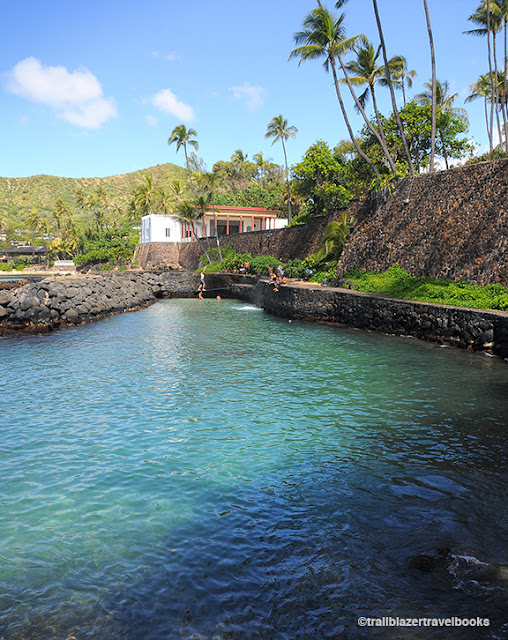 Millionaire heiress Doris Duke (back in the 1930s when a million was real money) built her fabulous mansion Shangri La in the shadow of Diamond Head in Kahala. Tours are available. But you can also visit quirky Cromwell's Cove (above), located right below the mansion, by taking a short path from a neighborhood street. The little man-made cove is known mostly to locals. 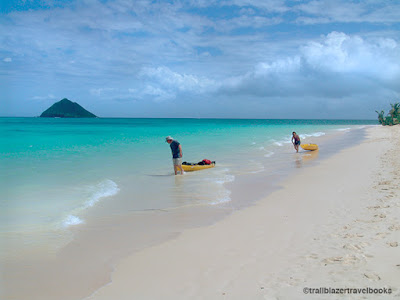 Sexy Lanikai Beach, which borders a residential enclave, is often a set for fashion-model shoots and commercials. A dreamscape of powder-sand beaches is accented by tiny islands, a few  of which are reachable by kayak or SUP. Right next to Lanikai is Kailua Beach Park, ho hum, more of the same.

For more travel tips and itinerary planning at your fingertips consult your No Worries Hawaii guidebook.  Available on Amazon.com. 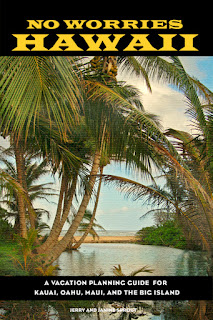 Email ThisBlogThis!Share to TwitterShare to FacebookShare to Pinterest
Posted by TrailblazerHawaii at 9:10 AM