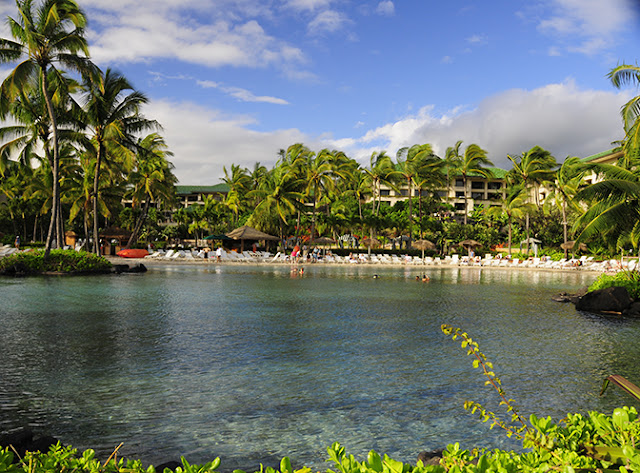 To stay at one of Hawaii's destination resorts, you'll need to do serious damage to the titanium credit card—from five hundred to several thousand dollars per night. But to cruise by and check them out is free. The best resorts  have museum quality art, botanical gardens, and a mini-amusement park feel.

The Asian-inspired architecture of Kauai's Grand Hyatt on Kauai's south shore has room to roam. The inside features a whimsical garden fringed by Stevenson's Library, a nightspot with sushi and spirits. An acres-large saltwater lagoon sits between the beach and pool with slides and chutes that is out of Disneyland. (Note: Using the pool is limited to guests.) Near the port in Lihue is the Kalapaki Bay Marriott, whose pool is ringed with hot tubs. Inside is the Princess, a koa canoe used by Prince Kuhio, fronted by a huge lagoon filled with prized koi. On the north shore of Kauai is the St. Regis Princeville, where a 30-foot-high wall of glass frames Hanalei Bay. Also a worthy stop on Kauai is the Courtyard by Marriott in Kapa'a, where orignal oil paintings by Herb Kane grace the walls. 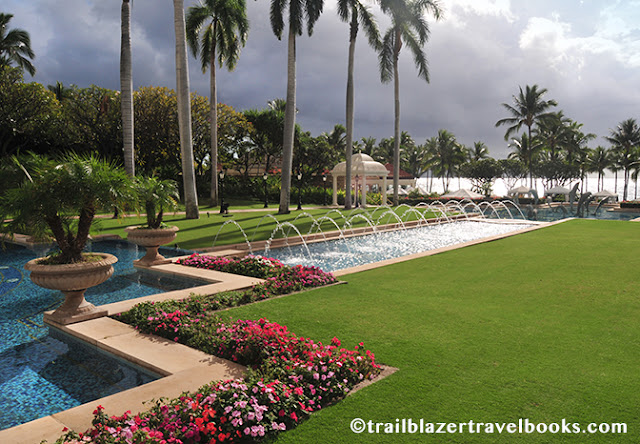 A walking path runs along the beach and several world-class resorts in Wailea are on Maui. Be sure to duck into the Grand Wailea (above). The grounds are sprawling and specatular. 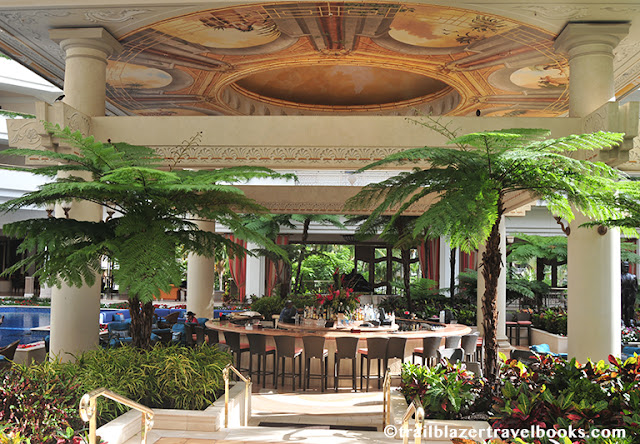 The interior spaces of the Grand Wailea are fit for a queen's wedding. Statues by Botero rest among columns and ferns. A Kamehameha statue presides over a waterfall fountain off the portico.With art galleries including the works of Dale Chihuly, the esteemed collection of over 72 sculptures and murals was estimated at around $40 million when last appraised. Included in the extensive collection are 18 Fernand Leger bronze sculptures - the largest collection outside of France. 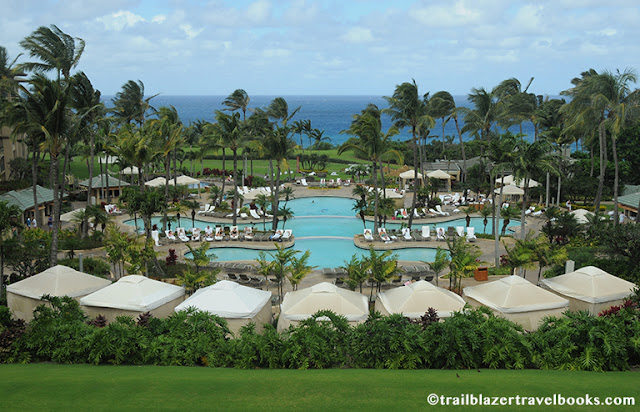 The Ritz Carlton on the north shore of Maui is dramataically set back from the ocean—out of respect for an ancient Hawaiian burial site. 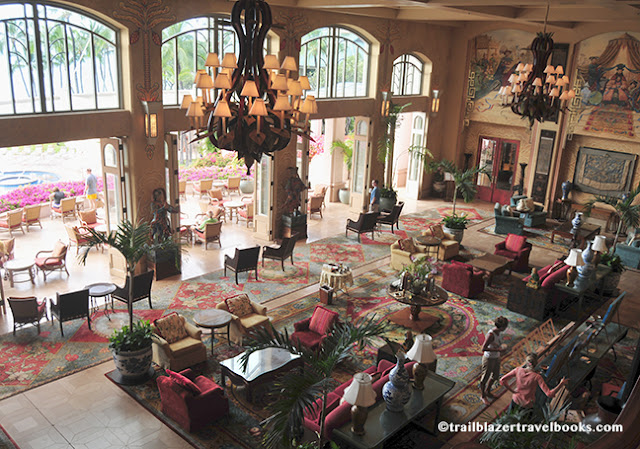 A ferry ride from Maui to Lanai (great day trip) is the way to see two of Hawaii's best resorts. Above is the Four Seasons Resort Lanai. Software billionaire Larry Ellison bought the whole island from media tycoon Rupert Murdock in 2012. 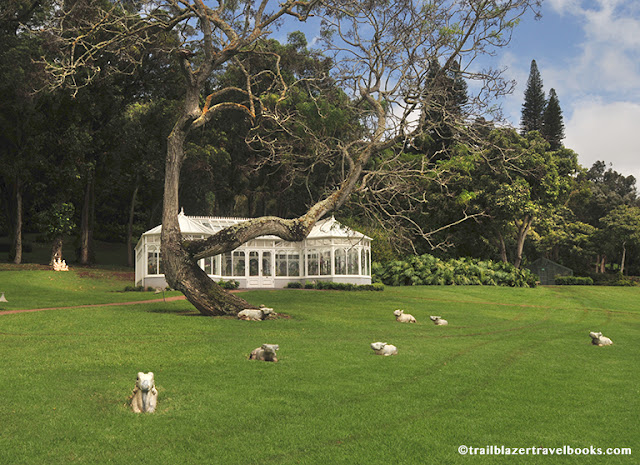 A shuttle bus takes you inland to the Four Seasons Lodge at Koele (reopening soon), looking more like an colonial plantation manor than a Hawaiian resort. A manicured, 40-acre arboretum features a conservatory of orchids. Fanciful statues are sprinkled about. 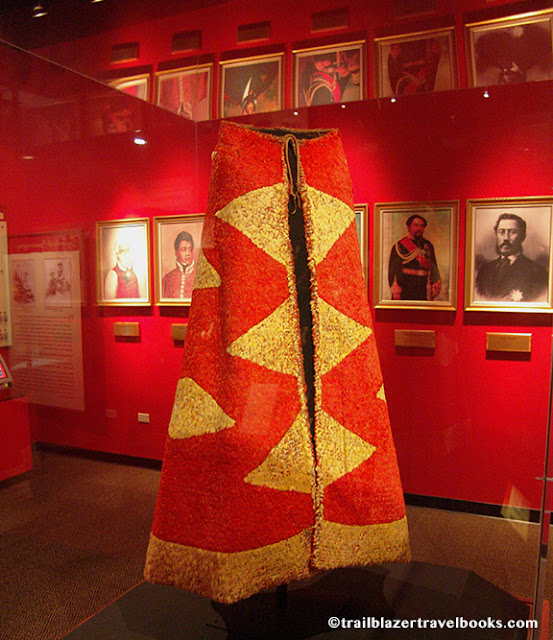 In the heart of Kona on the Big Island, is the King Kamehameha Hotel (now a Marriott). Though not a splashy building, the interior features art that could be in the Bishop Museum—like this feather cape worn by the ali'i (royalty). You'll also find vintage trophy cases commemorating the heyday of sport fishing, when actors like Lee Marvin and Richard Boone would play hard and drink harder. 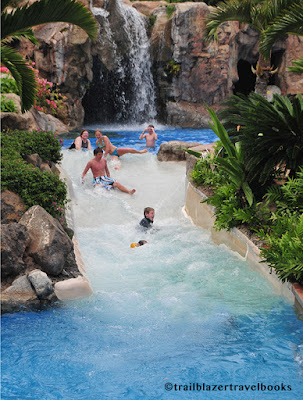 The South Kohala Coast of the Big Island (north of Kailua-Kona) has several of Hawaii's best destination resorts. The Mauna Kea is the oldest, the Mauna Loa has the best beaches and grounds, and the Hilton ... the Hilton is a mind-blowing good time for the whole family. A monorail and boat ferry skirt a waterway through swank shops and courtyards. A grand staircase with columns provides entry to a man-made lagoon.  Dolphins cavort to the commands of trainers. A fee is charged to park at the Hilton (although Hawaii the Big Island Trailblazer notes free spots nearby). 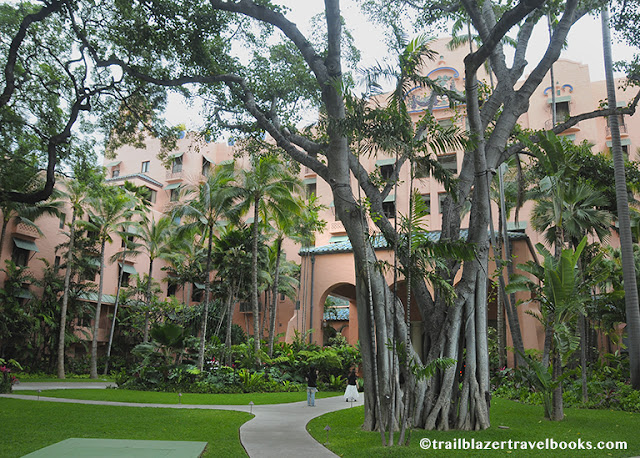 Waikiki Beach, on Oahu of course, is one big, wild, weird resort strip. The soul of the place is the Royal Hawaiian Hotel—the Pink Lady—which still exudes the glory days of tourism it promoted when built in 1927.  Matson liners crossed the Pacific to bring visitors. The vintage vibe extends next-door to the Moana Surfrider Hotel, dating from 1901. A museum upstairs tells the story. 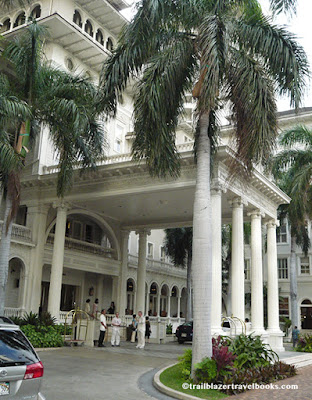 Trailblazer guides have all the details on all these resorts, plus many more worth visiting. You don't have to spend a pile to enjoy the luxury in Hawaii.

Email ThisBlogThis!Share to TwitterShare to FacebookShare to Pinterest
Posted by TrailblazerHawaii at 5:54 PM