Oahu's Olomana Ridge is for sure-footed thrill seekers only 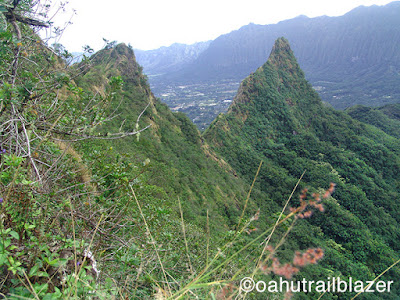 Olomana—a triple-peaked, stand-alone ridge on Oahu's Windward coast—is a real-deal adventure hike. The stats aren't intimidating: 4.25 miles round-trip with about 1,600 feet of elevation. But trekkers who do all three peaks will feel like they've been to hell (or heaven) and back. 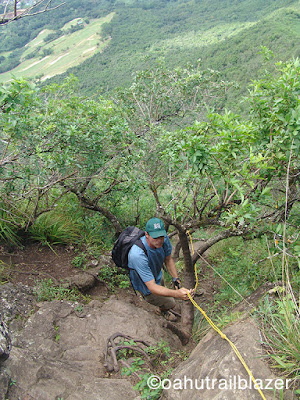 The first peak is rope-aided (always test before trusting), and gives you a view of the other two peaks.  Most hikers can do this one. The second peak is a scamper across a razorback saddle that only those with little fear of heights will want to try. The third peak is downright dangerous, to be attempted only by mountain goats with a screw loose in the old brainpan (that's a slight exaggeration, but death or injury are true possiblilities). 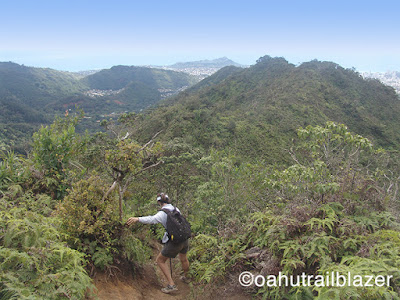 The bulk of the hike and climb is just your typical steep, rooty, muddy ascent. A hiking pole helps and you might want to wear dark shorts, since a butt-plant is likely along the way. Although Olomana is a well-known trail (featured even in the New York Times), the directiions and parking are quirky. Oahu Trailblazer has all the specifics on the hike, as well as several other ridge and jungle hikes in the vicinity that aren't quite as hair-raising. 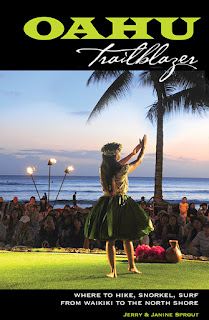 Email ThisBlogThis!Share to TwitterShare to FacebookShare to Pinterest
Posted by TrailblazerHawaii at 3:26 PM