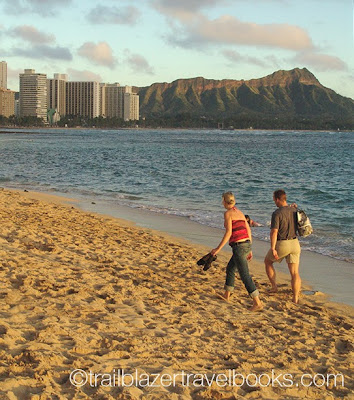 With a rippling green ridge that emerges from the skyscraper profile of Waikiki, Diamond Head is one of the world's iconic visions. Though it indeed sparkles, it was calcyte crystals and not diamonds that caused Bristish sailors to misname it in the early 1800s. The Hawaiian name is Leahi, because its shape is similar to the fin of a yellowfin tuna. 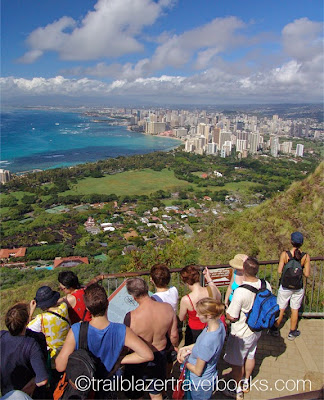 When making the one-mile, 550-foot pilgrimage to its summit, you won't know where you are until reaching the top to gaze down upon the Honolulu beachfront. What appears as a lush peak from Waikiki turns out to be the uppermost portion of an oval-shaped crater that is tilted at an angle. The crater floor is 350-acres of dryland scrub and parking lot, part of Hawaii's most poplular state park. 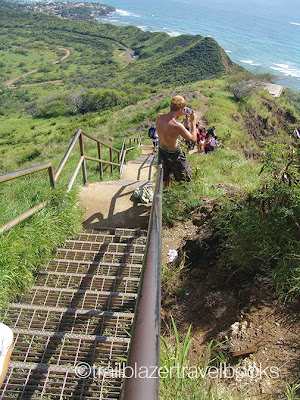 The oddball summit trail,  remnants of a former military installation, is a series of switchbacks, stairways, tunnels, and even a squiggle through concrete pillbox. The quirkly route is matched by the assemblage of daily visitors, ranging from fully equipped trekkers to the ill-prepared foreign tourist in platform sandals. The going is slow on narrow sections. 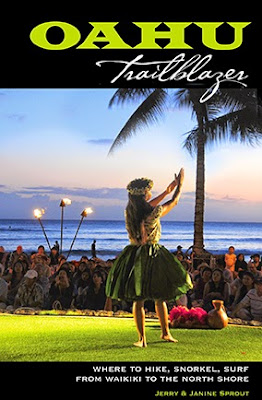 Oahu Trailblazer has tips on the best time to see Diamond Head, as well as lesser known hikes in the Honolulu region (like the kick-ass climb to Koko Crater).


Email ThisBlogThis!Share to TwitterShare to FacebookShare to Pinterest
Posted by TrailblazerHawaii at 11:40 AM