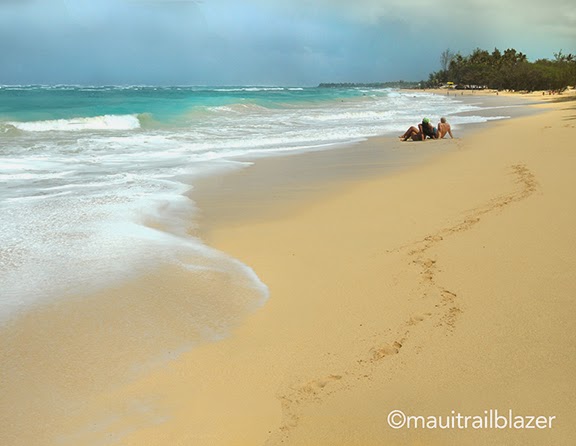 "For hiking, snorkeling, surfing, biking locations, this is the guide to take along." - Outside"In both layout design and content, the very model of what a user-friendly outdoor guide should be." --Midwest Book Review"Many of Maui's attractions are easy to find. But other places are off the beaten track.I recommend a guidebook called Maui Trailblazer, which has detailed descriptions of trails and remote natural sites." --New York Times

Trailblazer divides Maui into 55 geographically related 'trailheads,' giving specific descriptions of all the hikes, beaches, attractions, town strolls, and cultural sites that are nearby. Included in the fun are the outer islands of Molokini, Molokai, and Lanai. Have your yellow marker handy and give Trailblazer the once-over before you leave. And then have it with you and hone in while exploring Maui. 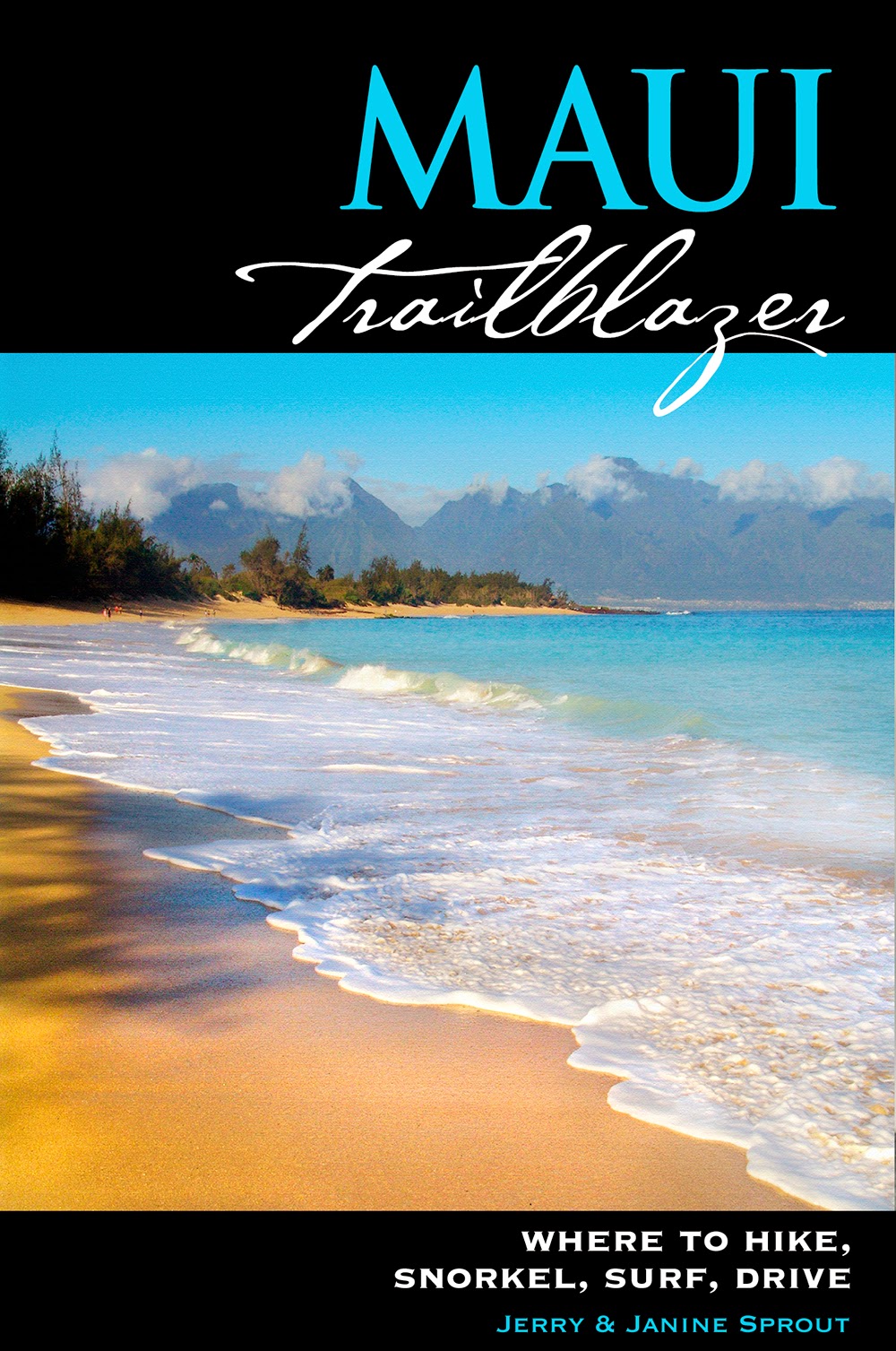 Maui Trailblazer 2015 is available on Amazon.com and BarnesAndNoble.com or if you wish to buy a signed copy (20% discount, free shipping) write to trailblazertravelbooks@gmail.com.

Email ThisBlogThis!Share to TwitterShare to FacebookShare to Pinterest
Posted by TrailblazerHawaii at 9:38 AM

A current map and recent photo.  Red Cross is on the scene. 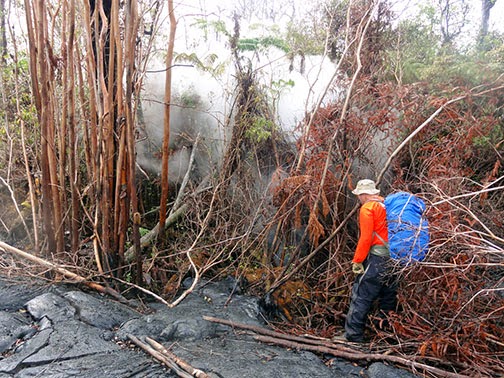 From the USGS: "The flow advanced about 190 meters (210 yards) during the preceding 19.5 hours, traveling completely through the cemetery above Pāhoa. At the time of mapping, the flow was 715 meters (780 yards) directly upslope from Pāhoa Village Road. The flow was advancing downslope between two intersecting steepest-descent paths and was trending toward the southern one. The flow will likely return to the original steepest-descent path about 300 m (330 yd) upslope from Pāhoa Village Road, if it continues."

For the latest Civil Defense message, go to http://www.hawaiicounty.gov/active-alerts/.

Email ThisBlogThis!Share to TwitterShare to FacebookShare to Pinterest
Posted by TrailblazerHawaii at 1:00 PM

Danger awaits on the nicest of days in Hawaii

The truth is, someone dies every few weeks while having fun in Hawaii. The demons are not  powerful volcanoes, tsumanis, earthquakes, and hurricanes, but rather  'booby traps' that lie along the beaches and trails on perfectly nice days.  The good news: Almost all  recreational deaths in Hawaii can be avoided. 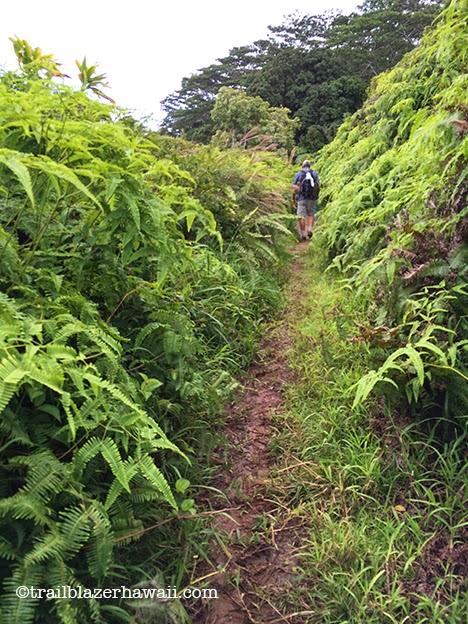 Rule one is to stay on the trails. You can be walking along in lush greenery like this and step off the trail to take a picture, and ... 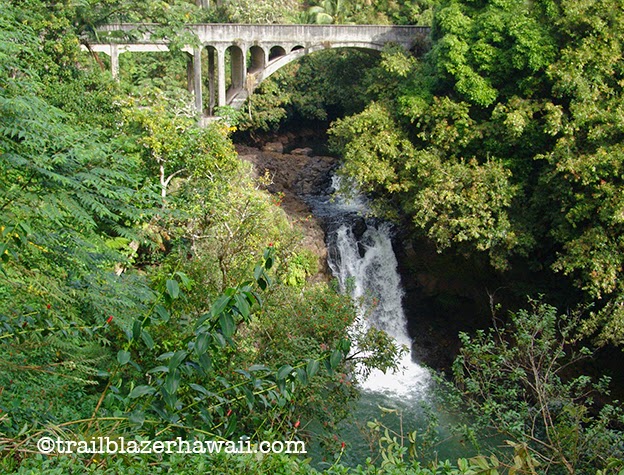 ... get an airborne view like this as you freefall. Greenery disguises drop offs. The lush forest also can become a maze without exit. Forget about using GPIS to find routes. Stay on the trail and don't venture into the forests. Getting lost is fairly certain, and unseen earth cracks and lava tubes provide trap doors to deep dark places. (On the other hand, don't fret about poisonous insects or snakes since there are none in Hawaii.) 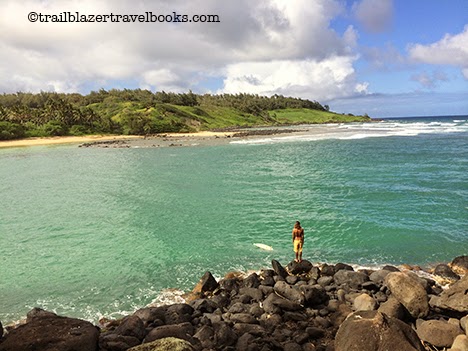 This scene hardly looks life threatening and this local surfer is reading the waves with experience. But rogue waves easily sweep people from rocks, so observe the wave action for many minutes  before venturing out. Don't walk out on wet rocks. On a given day, if normal surf is breaking near where you are standing, then a 'rogue' wave—one larger than the normal sets—will be in postition to take you out. Bigger surf also means stronger rip current. All that water pounding in has to go out someplace. In a small bay like this, don't swim out until you know where the rip current is. 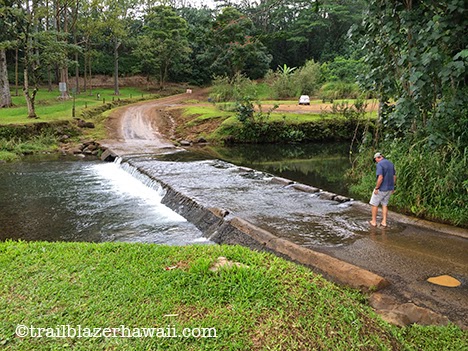 This spillway feels good on the feet on a day like this. During rains (and it can be raining in the mountains when it's dry nearer the coast) streams rise quickly to flash floods that take away hikers and even cars. Stay out of stream valleys during rains and head for high ground immediately if you hear what sounds like a jet engine coming down the gorge. Don't cross fast moving water; if you get caught on the wrong side, wait until the water lowers before crossing.

And, most of all, don't forget that the most popular way to die having fun in Hawaii is drowning, often from head and neck injuries caused by wave action or fatiguing in a rip current. Again, stay out of big waves and back from the shore. If you get caught in a rip current, don't swim against it. Rip currents are near-shore events that will release you behind the waves. Swim in a direction perpendicular to the force of the current. Avoid swimming at remote beaches, where no one will see you from shore.

The Trailblazer guides for each of the islands list the specific dangers associated with particular hikes and beaches, and also have sections on recreational safety and hidden dangers. No Worries Hawaii, a vacation planning guide, has a chapter on how to play it safe on vacation. You don't have to wuss out and there's nothing to be afraid of. Adventure awaits. But many people do die in Hawaii on vacation and you don't want to be one of them.

One last tip: Retractable hiking poles fit easily into luggage and can be a lifesaver in Hawaii. Use them to probe greenery, for stability on stream crossings, for rock hopping on wild coastal routes, and, most importantly, to provide braking when coming down steep, narrow ridge trails that can be as slick as snot after rains.

Email ThisBlogThis!Share to TwitterShare to FacebookShare to Pinterest
Posted by TrailblazerHawaii at 1:52 PM

Keeping it real at Ko Olina. Or not. 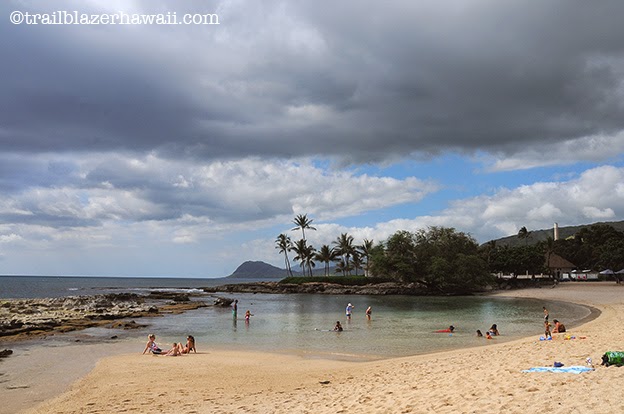 The Lanikuhonua Hawaiian Cultural Park is a serene little cove that for centuries was a retreat for Hawaiian royalty.  In 1939, Alice Kamokila Campbell (daughter of super-rich James Campbell), turned the beachside oasis on Oahu's West Side into a community-spirited park and organization. 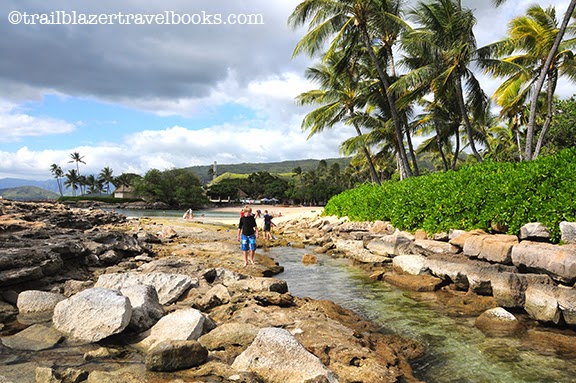 From the beach, you can walk tidepools along the gardens and modest buildings that comprise the cultural park. 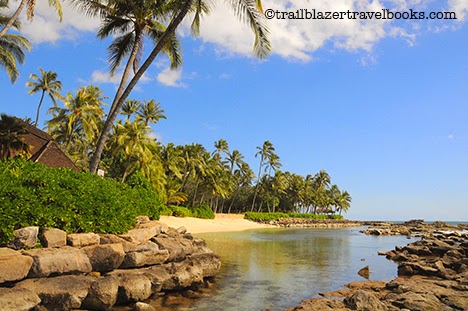 Just around this palmy point the mood shifts dramatically. High end resorts, including a new effort by Disney called the Aulanai, sit alongside four, perfectly symmetrical coves with sandy beaches that were blasted out of a barren limestone reef. Phony, for sure, but still a good place to get in the water. The Grand Ko Olina Resort hosts NFL players for the annual Pro Bowl. Check out Oahu Trailblazer, pages 198-200, for the best places to park, walk, and snorkel. Most visitors who aren't staying here don't know the place exists. 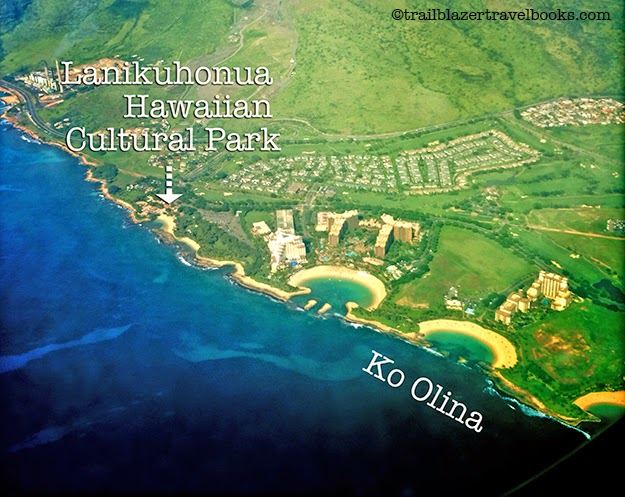 Email ThisBlogThis!Share to TwitterShare to FacebookShare to Pinterest
Posted by TrailblazerHawaii at 4:56 PM