Though the Honolua Marine Preserve on Maui's north leeward coast is best known for snorkeling, adventure seekers can also add a hike and surfing safari to the day's mix. From marginal roadside parking (show up early on primo days) a short walk through a botanical forest leads to the small bay with a rocky shore. After rains, a stream muddies the waters, but aside from that the water clarity is good.

You can take a peek from a turnout on the south side of Honolua as you approach from Kapalua. On the north side, a spur road leads out to the mouth of the bay, where surfers carry boards down a cliff to right-breaking waves that are among the best in Hawaii. The bluff at the bay's mouth is a perfect grandstand. From the surf parking, a road/trail skirts the cliff to Lipoa Point. You can walk a low shelf to water's edge to watch some spectacular wave action, and, on the calmest of days, find some nooks to take a dip and do more snorkeling. Maui Trailblazer has the deets, beginning on page 72.


Email ThisBlogThis!Share to TwitterShare to FacebookShare to Pinterest
Posted by TrailblazerHawaii at 8:36 AM

Hawaii: Easy to find the Sublime 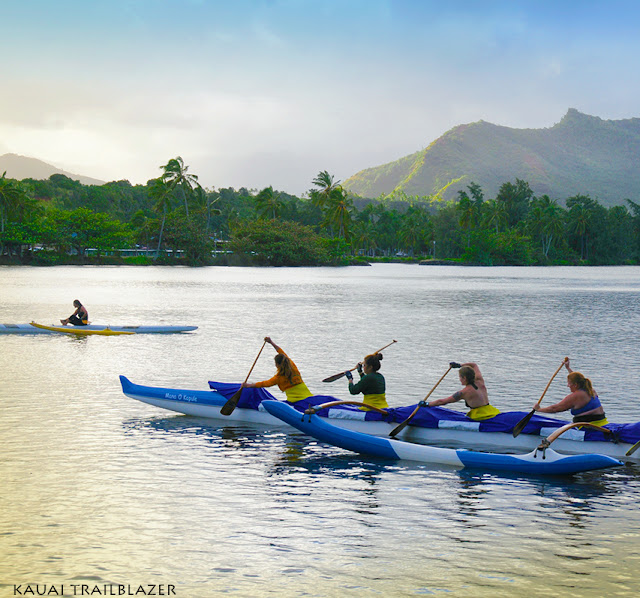 There are moments when time stands still (or we realize that time is always standing still), when our bodies fuse with nature and peace ensues. These moments abound in Hawaii, and you don't have to climb a mountains to find them. Here are a few easy-to-get-to spots to find the sublime:

1. On Oahu, look no farther than Prince Kuhio Beach Park (pictured) right in the heart of Waikiki. High-rises and designer shops line one side of Kalakaua Avenue. But on the other side is the dusty-rose-colored Pacific, where surfers always ride the sun into the horizon. A free hula performance adds to the show, on the site where former Hawaiian royalty had their homes.

2. On Kauai, pull off at Wailua Bay, on the Kapa'a side of the Wailua River. A busy (for Kauai) intersection carries cars above, but below you will find local canoe teams putting in at the wide, placid river mouth--the first settlement of the Polynesians of ancient times. The sharp green ridge of the Sleeping Giant provides a backdrop.

3. On Maui, pull in at Olowalu Landing, a historic packed-earth protrusion that is off the highway on the way to Lahaina-Kapalua, which carries a conga line of rental cars. Sea turtles and whales cruise by the foamy shore and the West Maui Mountains reflect the sunset inland. (You'd never guess one of Maui's bloodiest battles took place here.)

4. On the Big Island, cruise south on busy Ali'i Drive, and keep right where the bypass road continues up the hill, carrying commuters with it. Here, at the Kuamo'o Battlefield—where piled stones mark the graves of those fallen at the last major battle in Hawaii—you will find a spot to watch waves do battle with at Kualanui Point. You are behind the sets, and very close, as they roll by to collide with the lava reef, an eternal conflict that the water will eventually win.

The Trailblazer guides have more directions to the sublime, both close to a parking spot and farther away.
Email ThisBlogThis!Share to TwitterShare to FacebookShare to Pinterest
Posted by TrailblazerHawaii at 9:31 AM

You don't want to hear someone yell, "Fire!" in a crowded theater and you sure as hell don't want to hear the scream of "Shark!" at a  beach. Neither event is likely, but the thought of a shark in the water while snorkeling is a lot freakier than thinking of flames at the movies.

The odds of a shark bite in Hawaii are nearly a million to one, and  dying from said bite happens in one in a hundred bites. Florida and Australia have five to six times more attacks. Still, a visitor did die this year in the Islands, bringing the total deaths since the 1800s to 23. You are way more likely to choke on a steak.

Still ... the odds of being a shark's snack increase greatly when you enter the warm Hawaiian waters where some three dozen species live. Only eight of these fish are normally seen near shore, most often the smaller Blacktip Reef Shark. Called "mano" in Hawaiian lore, sharks--and the aggressive Tiger Sharks in particular--were part of the test for young warriors, like Kamehameha, who had to jump from an outrigger canoe and wrestle one.  Great White Sharks, the so-called maneaters, have been sighted fewer than ten times in the last 60 years, although recent satellite-aided studies show the Whites regularly migrate to Hawaii.

Here's how to reduce to practically zero your chances of being bitten:

1. Avoid swimming at dawn and dusk, when water visibility is poor. Sharks bite people by accident (ooops), and can't see as well at these times of day.

3. Don't swim at a river or stream mouth, which deposits shark food into the ocean.

4. Take off the shiny watch and bling, which are thought to attract sharks. Same goes for bright contrasting swimwear.

5. Don't bleed into the water.

6. Try not to splash the surface too often.

7.  Don't swim when sharks are present and do not harass a shark. As if.

8. Hawaiian legend says that the shark gods bite when the Wiliwili trees bloom, which is in late summer and early fall. Scientist today think this is linked with the migratory pattern of Tiger sharks, which show up in the Islands as part of their 1,600-mile loop around the Hawaiian Archipelago.

9. History says, "Swim on the Big Island of Hawaii," which has only a few reported attacks. Maui "wins" with 42 attacks, followed by Oahu wih 35, and Kauai with 23---though Kauai's lower visitor rate and population make it riskier than Oahu. But in the last few years, the Big Island has become has seen a dramatic relative uptick in incidents. Attacks occur on all shores of the islands---not at particular hot spots.

The Takeaway: To avoid the dangers of vacationing in Hawaii, read the previous  Trailblazer  Hawaii post, and don't worry about sharks. Though you may want to re-read the shark-risk conditions just for fun.
Email ThisBlogThis!Share to TwitterShare to FacebookShare to Pinterest
Posted by TrailblazerHawaii at 3:58 PM