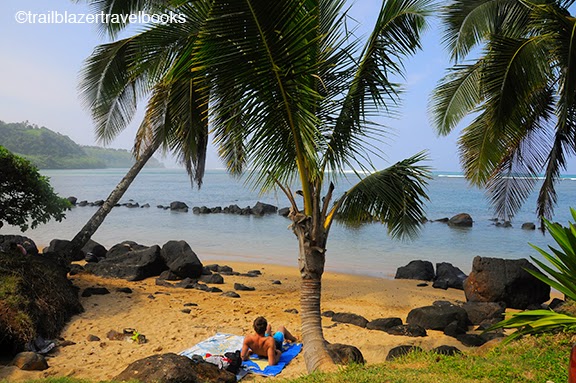 With a two-mile reef (one of Hawaii's longest) that always keeps the shorleline calm, and a backshore of parklands and shade trees, Anini Beach on Kauai's north shore is a picture-perfect family beach. Its vibe is friendly and access is plentiful, with many places to drop beach towels and call your own.

But watch out: At at least two place along the tranquil shore are rip-current channels that will take an unsuspecting swimmer on a ride out to the deep blue sea. One channel is between the campground and main beach, and the other is farther down, at Wyllies Beach.

The rip channels occur since all that wave water breaking over the reef into the shallow bay has to find a way back out. You can see the currents: Look for a blue channel, ripples in the water, and a break in the surf offshore on the reef. If you do get caught in the rip current, don't tire yourself out by swimming against it. Swim to either side, not back to shore. If you do get swept out, don't panic. Rip current is a near-shore event, and it will release you beyond the breakers. But the safest approach is not to get caught in the first place! 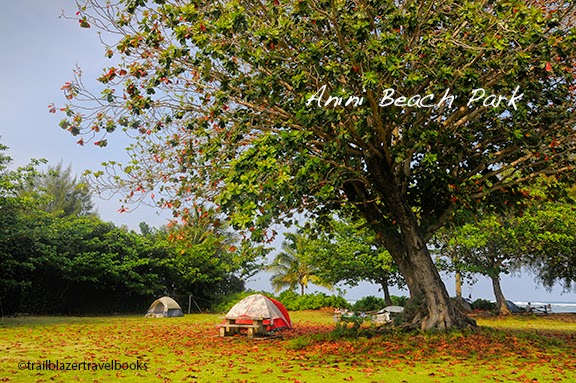 All Trailblazer guides carry safety warnings particular to each beach and trail. 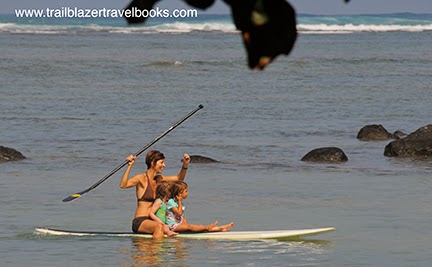 Email ThisBlogThis!Share to TwitterShare to FacebookShare to Pinterest
Posted by TrailblazerHawaii at 11:53 AM

The Breath-taking Grandeur of Haleakala


Bring the outerwear and real hiking boots and then get lost in Maui's Haleakala National Park. With all the trails and fetching scenery it's easy to get sucked into the the vast crater (technically an eroded valley). Remember: You start out at 10,000 feet, so save enough energy and wind to climb back out after the day's adventure is done. Maui Trailblazer has details on the park's many trails. 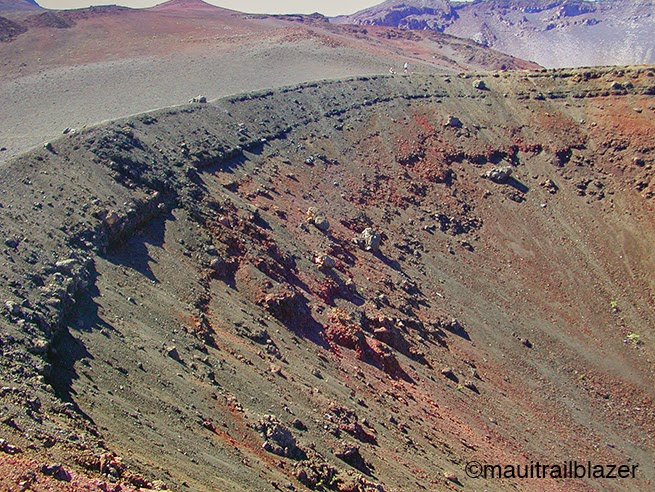 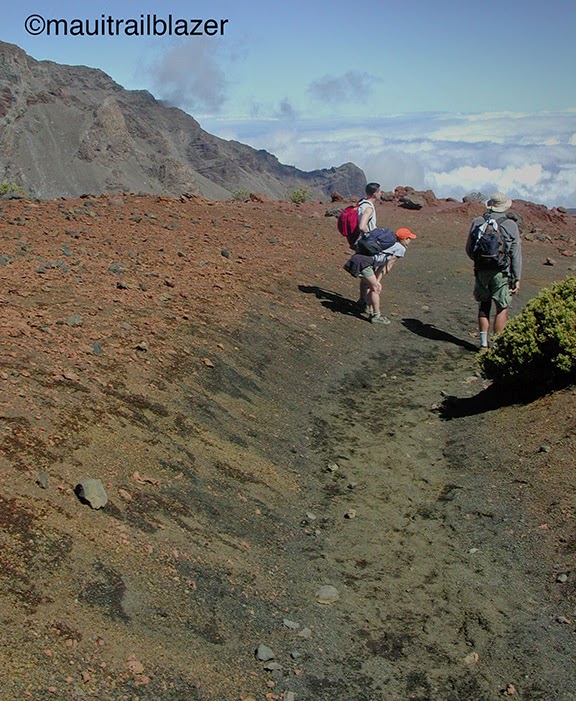 Email ThisBlogThis!Share to TwitterShare to FacebookShare to Pinterest
Posted by TrailblazerHawaii at 11:41 AM

Oahu's Maunawili Falls: This mini-adventure brings out your inner Tarzan 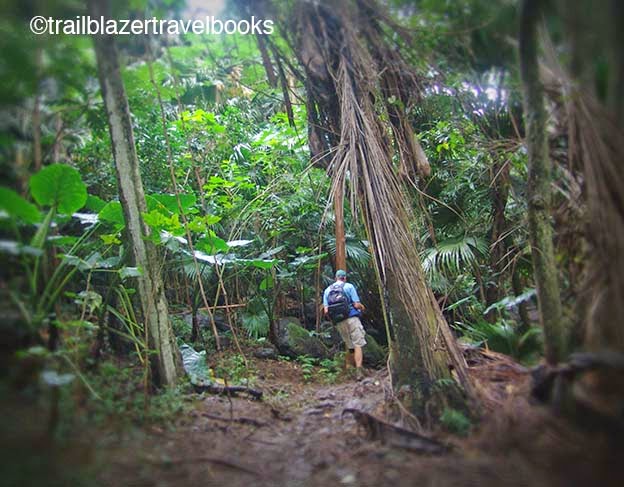 Lace up the mud shoes at a trailhead in a suburban neighborhood near Kailua on Oahu's Windward Coast and spend a half day on a jungle outing to a swimming hole with a waterfall. Maunawili Falls is pocketed into the east side of the Ko'olau Mountains, only three miles, round-trip, but wth a healthy 425 feet of up-and-down. About four stream crossings are required. The footing is dicey over rocks and roots, and flora makes a tunnel out of portions of the trail. The route has a junction with the 10-mile Maunawili Trail—a ragged contour route along the base of the Ko'olaus—providing an opportunity for a longer trek. Pleasant weekend days attract lots of hikers, so you may seek an alternative if solitude is high on the agenda. Oahu Trailblazer has several nearby options. 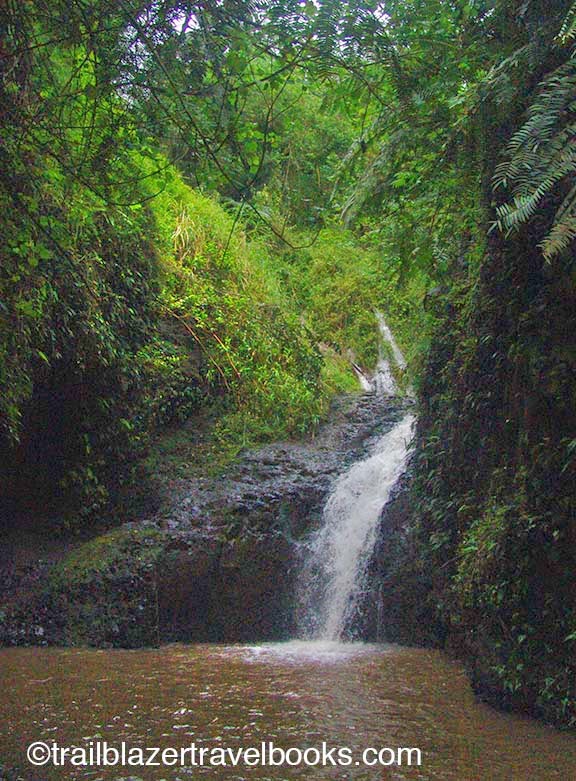 Email ThisBlogThis!Share to TwitterShare to FacebookShare to Pinterest
Posted by TrailblazerHawaii at 1:28 PM

After shelling out a couple grand for a Hawaii vacation, visitors want to get their money's worth and are therefore eager consumers of top-ten lists that cover everything from shave-ice joints to sky-diving instructions. No one wants to feel like they missed out.

But sober words of caution are in order: First, one person's oh-wow is another person's ewwwwwww. There's just no accounting for different tastes. Second, no matter what the attraction, beach, or trail, you need to pick the right day to see it at its best. And, third (here's the country-song-sad part,) some places have become so popular that the experience is no longer sure to be "the best."

Let's stick to beginner snorkeling. Here are popular places on each island that have been killed by kindness; followed by suggestions to nearby alternatives that are relatively free of crowds and high on scenic value. 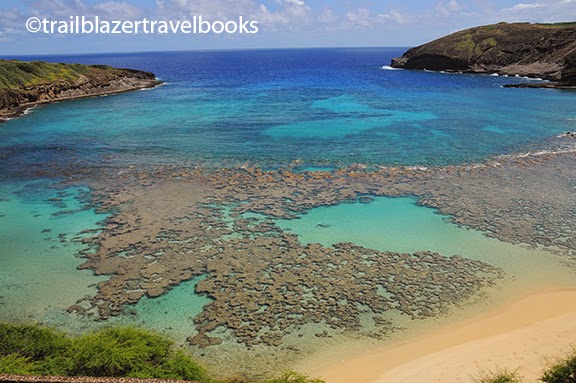 Popular: Hanauma Bay. The bay (pictured) can be a zoo, featurng a full-parking lot, irksome (if necessary) regulations, and dead-looking coral where white hairy legs seem more plentiful than fish. Check out the dreamy view from the free gardenscaped grounds above the bay, and move on.

Alternative: Bactrack toward Kahala to Cromwell's Cove-Ka'alwai Beach, or continue past Hanauma to Makai Research Pier on the southern end of the Windward Cost. Cromwell's is a local's hangout on weekends, and Makai Pier, though hardly a secret, is no fuss.

Popular: Tunnels Beach, with the Bali Hai (Makena) Ridge lofted above, is a Hollywood fantasy of tropical snorkeling. But with limited parking, the fantasy turns to a b-movie. Same goes for awesome Ke'e Beach, at road's end. Too much of a scene at peak times.

Alternative: Backtrack to Princeville and take a short steep walk down to Hideaways or Kenomene Beach. Princeville is a resort area, but these beaches are fairly wild. Or go farther down the coast and check out hike-to Papa'a Bay. There's a movie director's mansion at the backshore of Papa'a, but the bay is postcard pristine.

Popular: Monkey-see-monkey-do tourists would hobble over piles of jagged lava to get to Kalaeloa Cove (the Aquarium) in the Ahihi-Kinau Natural Area Reserve south of Wailea. Due to adverse impacts, the government boys have shut this place down for a rest, and the crowds gather at nearby Dumps and Ahihi Cove, at the other end of the reserve.

Alternative: Not far away on this same coast are Oneuli (Black Sand) Beach and Chang's Landing, a.k.a. Turtle Town. Snorkeling tour companines bring boats from Kihei to these spots, which can be accessed from the shore. Oneuli has a sandy entry, while Chang's requires a nimble entry at a reef.

Popular: At the south end of Ali'i Drive in Kona, Kahalu'u Beach Park can seem more like Coney Island. Just too much flesh and hubbub.

Alternative: Head a tad farther south on Ali'i Drive to Keauhou Bay and the Keauhou Sundeck. Keauhou has tour boat launches and locals in kayaks and outrigger canoes, but relatively few swimmers. Or go just north of Kona to Old Airport Beach and make your way to Kaiwi Point, an excellent choice when surf is low.


These are just a few of many places that can be "best" for snorkelers on a given day. Bottom line: check out the Trailblazer guide for the islands which has all the spots described, and make the call for yourself.
Email ThisBlogThis!Share to TwitterShare to FacebookShare to Pinterest
Posted by TrailblazerHawaii at 4:19 PM 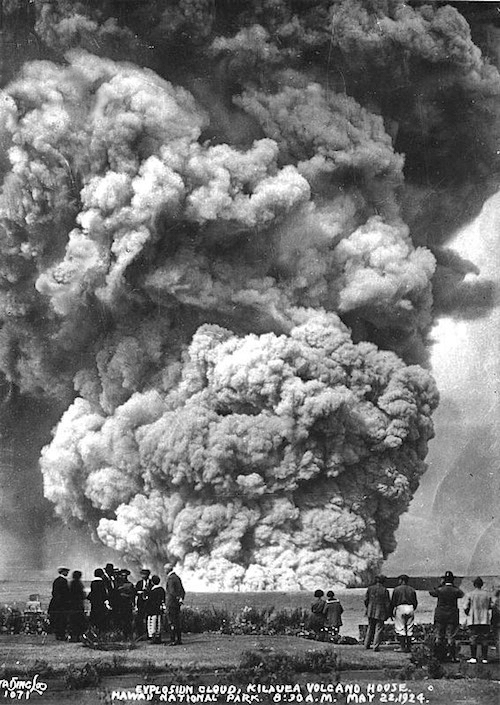 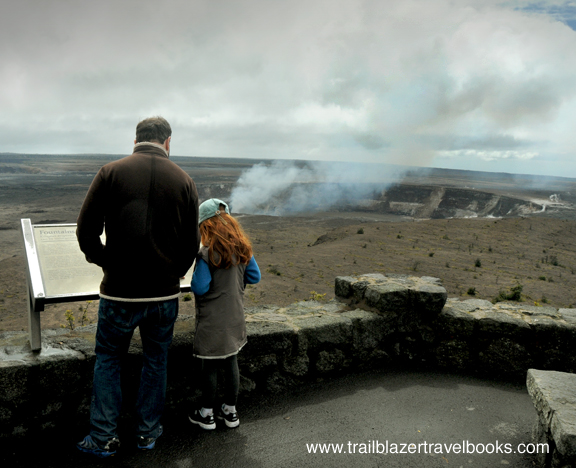