WHY Hawaii? Ten Big Truths and one Joke 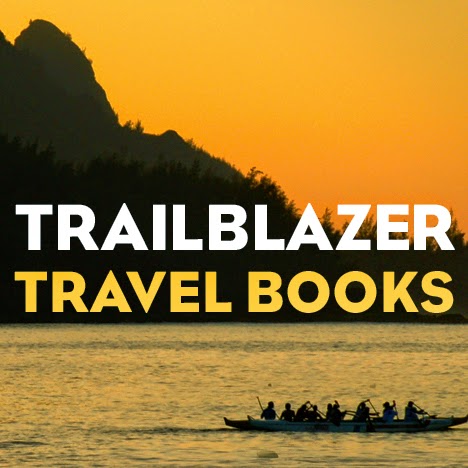 Excerpted from No Worries Hawaii: A Vacation Planning guide for Kaua'i, Oahu, Maui, and the Big Island. You can find white-sand beaches, aquamarine pools and swaying palms at many wonderful places on this big blue orb. But aside from being the tropical fantasy, what makes Hawaii unequaled, no ifs ands or buts? Here are Ten Big Truths that apply to Hawaii. Can you spot the exaggeration?

1. THE LAST LOST WORLD Human beings had inhabited virtually the entire world before migrating to Hawaii. The earliest known footprints were made about 200 AD by sailing canoe voyagers from the Marquesas, coming some 2,400 miles from the south. A second wave of voyagers, from Tahiti, arrived around 1200 AD. These Polynesians--the Hawaiians--made back-and-forth migrations for several centuries, until the late 1400s, when they were isolated on their Pacific homeland.

2. THE NEWEST NEW WORLD The Western World, in the form of British Captain James Cook (who was looking for the Northwest Passage) found Hawaii only recently--in 1778. These islands in the Pacific became crucial to expanding trans-Pacific trade.

3. THE WORLD'S HOTTEST HOT SPOT The Hawaiian Islands are volcanoes. Although the northernmost main island, Kaua'i, is more than 5 million years old, parts of the Big Island are as fresh as a newborn babe. That's because the earth's crust is slowly moving northward over a "hot spot" of copiously flowing magma, like the shell of an egg rotating around its yoke. New lava piles up and forms islands, and then the islands move north. Loihi, the newest would-be island, is now underwater about 20 miles offshore the Big Island.

4. NOW YOU SEE 'EM, NOW YOU DON'T As the islands move forward on the geologic conveyor belt, they are eroded by rain, wind, and waves. The Hawaiian Islands include more than 100 tiny islands and sea-washed atolls north of Kaua'i. Kaua'i is headed for submersion, to be followed by the other islands.

5. THE WORLD'S TALLEST MOUNTAINS True, the Big Island's volcanoes, Mauna Loa and Mauna Kea, are just under 14,000 feet in elevation. But if you measure from their peaks to the base on the seafloor, they are well over 40,000 feet--easily the earth's tallest.

6. BIGGEST STATE IN THE UNION That's right Texas, you're number three. The Hawaiian Archipelago extends for about 1,600 miles and contains some 123 islands, all comprising the State of Hawaii. If territorial waters are included in area, the total is more than twice the size of Alaska.

7. FARTHEST GETAWAY IN THE WORLD The eight major Hawaiian Islands are in the middle of the Pacific, surrounded by 65-million square miles of open water and at least 2,000 miles from other islands or continents. It's easily the world's most isolated landmass.

8. THE ORIGIN OF SPAM Sure, everybody with email knows about spam now. But Spam is all about Hawaii, where record amounts are enjoyed each year per person. The craze began when Hawaiian warriors in ancient times sailed north into the Pacific, harboring pigs in open canoes. Reaching the Mainland, they then paddled up the Colorado River, scaled the Grand Canyon, crossed the Great Plains, and reached the frozen tundra of Austin, Minnesota. The pigs could go no farther. Absent ti leaves for a luau, the Hawaiians concocted a way to jellify the pork into square cans. During WWII, Hormel Foods started shipping the stuff back to Hawaii.

9. THE ORIGIN OF NEW LIFE FORMS Some 6,000 insects, birds, and plants are native to the Hawaiian Islands, having evolved from about 120 seeds that washed up or were flown here in bird stomachs. Hawaii became rich with endangered and rare species, many of which are now extinct. An isolated Eden, a planet in the Pacific, Hawaii is where new earth rises from the sea and new life forms evolve.

10. WETTEST SPOT ON EARTH Mount Waialeale on Kaua'i gets some 40 feet of rainfall per yeare. Rainfall is not normally a selling point for vacation destinations. But all that rain translates to resplendent greenery and waterfalls. Most of the rain takes place at the highest elevations inland. The leeward sides of the islands are desertlike, complete with cacti, receiving around 10 inches of rain reach year.

11. ALOHA LIVES Led by transplanted Americans, a rebellion of business interests overthrew the Hawaiian Kingdom in 1893, later imprisoning Queen Liliuokalani in her own palace. President Grover Cleveland at the time ruled the overthrow illegal and that the monarchy be restored. But his ruling was ignored, and when McKinley took office in 1898, the islands were annexed as a U.S. territory. Since Queen Liliuokalani chose to combat the overthrow in the courts rather than on the battlefield, the legal issue of Hawaii's sovereignty remains an open question. The U.S. formally apologized for the overthrow in 1993. The unmet promise of the Hawaiian Kingdom remains an open issue and aloha--Hawaii's export to a world in need--remains a hope unfulfilled. If you look, you will see the spirit of aloha, not preserved for tourists, but rather living and breathing in the people and traditions of Hawaii.
Email ThisBlogThis!Share to TwitterShare to FacebookShare to Pinterest
Posted by TrailblazerHawaii at 11:05 AM