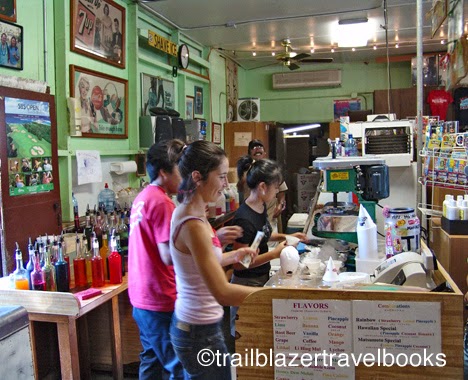 If everybody had an ocean, across the USA, there would still be only one Surf City, the undisputed surfing capitol of the universe, and it would still be Haleiwa on the North Shore of Oahu. The laid-back berg strung along a mile of the rural Kamehameha Highway is within a few miles of dozens of surfing beaches, including four on the world pro tour: Haleiwa Ali'i, Waimea Bay, Pipeline, and Sunset Beach.

The town is an assemblage of wood-frame buildings, some quaint and some unremarkable, strung out over about a mile of beachfront. Haleiwa began as a missionary settlement on Anahulu Stream in 1832, but its real growth came along with the pineapple and sugar cane industries that brought the railroad later that century. And with the rail came weekenders from Honolulu who sought a weekend getaway at the Hale Iwa Hotel, built by tycoon Benjamin J. Dillingham. Agriculture receded, but an infinite supply of waves remained, which became the town's new economic product. The beach business was given a boost by the surfer-Joe movies of the 1950s and 60s. Although developers faithfully hatch schemes of resort grandeur, the North Shore has so far resisted and retained its country vibe of benign neglect.

When the surf's up, surfers are always present. When big surf rolls in (25-feet and up) you can take a seat in the sand for free and watch some of the world's best and ballsiest athletes in action.


View Larger Map
Email ThisBlogThis!Share to TwitterShare to FacebookShare to Pinterest
Posted by TrailblazerHawaii at 10:51 AM