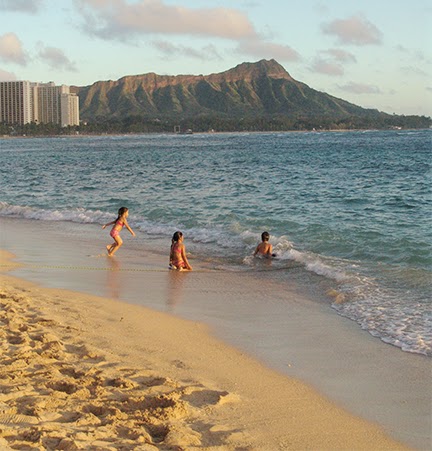 An eight-block grid of highrise hotels packed between the Pacific and the Ala Wai Canal, Waikiki Beach is indeed a ticky-tack post-war contrivance to bring tourists by the boatload (now plane load). But it is also real Hawaii, real to the bone.

The action centers around Prince Kuhio Park, in the center of a two-mile beach between Diamond Head volcano and the Ala Wai Yacht Harbor. A free Hawaiian dance performance is held nightly (as pictured). Prince Jonah Kuhio, who became Hawaii's congressional representative, turned his former homesite into a park. Before Kuhio, this high-ground in former swamplands was the home of Hawaiian Royalty, as attested to by the Wizard Stones, four huge boulders representing the mana (spiritual power) of four Tahitian ali'i (kings) who first sailed here circ 1350. Not far away is Kahi Halia Aloha (Place of Loving Rembrance) a burial mound for the remains of ancient Hawaiians that were uncovered during the construction of Waikiki.

At Kuhio Park was also the home beach for Duke Kahanamoku, surfing legend and Olympic swimming champion whose family owned the land where the Hilton resort now stands, not far north on Waikiki. The main drag, Kalakaua Avenue, hums at night with designer fashion shops, trinket stores, and fine dining, all lit by tiki-torch streelights. A few blocks away, Kuhio Avenue rocks out—and gets kind of seedy at night. The tourist scene is overwhelming, but the observant tourist will find roots of Hawaiian history at the core of Waikiki. (See Oahu Traiblazer pages 42-53 to take a walk that includes the glitz and culture.)

Here are some hotels that we recommend:

ILIIKAI HOTEL
AQUA HOTELS
OUTRIGGER REEF ON THE BEACH
Email ThisBlogThis!Share to TwitterShare to FacebookShare to Pinterest
Posted by TrailblazerHawaii at 8:44 AM