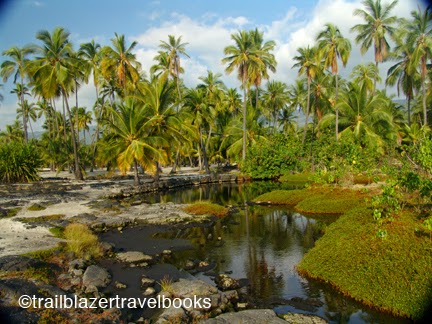 Pu'uhonua O Honaunau National Historic Park is where vanquished warriors and violators of the kapu system (the king's rules) could voluntarily go to escape other punishment. When justice is a swift club, people run to break into jail.

Many of the historic structures (including a 1,000-foot-long wall from the 1500s) remain at the park, which is south of Kona on Kealakekua Bay. On many days, native Hawaiians are on hand demonstrating ancient crafts, such as canoe building and weaving of mats.

Right next to the site on the north is Two Step, one of the best snorkeling spots in Hawaii. The name derives from the natural stairs in the lava reef that lead swimmers into gin-clear waters. On the south side of the national park is Pu'uhonua Beach Park and the Ki'ilae Village site, an excellent choice for a picnic followed by a coastal trek. And all of this is just a few miles via a connector road to Kealakekua Bay, with its own snorkeling, historic sites, and the surfing village of Ke'ei.

For more on this family getaway zone, check out Hawaii the Big Island Trailblazer, beginning on page 96.
Email ThisBlogThis!Share to TwitterShare to FacebookShare to Pinterest
Posted by TrailblazerHawaii at 3:27 PM