Clooney Walks on Water in Descendants

George Clooney, Shailene Woodley (playing his teen daughter), and the crew took a classic Hawaiian beach walk when they barefooted the sand from below the St. Regis Princeville Resort to the long curve of Hanalei Bay in the movie, "The Descendants." If you'd like to walk these footsteps in real life, be advised that you will have to cross the wide and often deep Hanalei River. To get to Hanalei from the resort on dry ground, a six-mile drive is required. 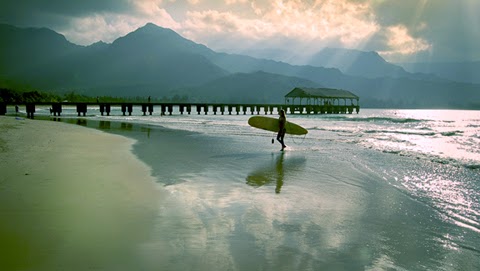 At the mouth of the Hanalei River—as far as you can walk from the St. Regis—is a stunning patch of ground from another one of Kauai's glamour moments: the lush terraces of the old Hanalei Colony Resort, which was the "estate" featured in "South Pacific." Up from the terraces are some high-end home sites, one of which (getting back to the "Descendants") is the future home of Laird Hamilton—who plays the chunky blond guy who was in the speed boat incident with Clooney's wife. Hamilton is as well known as any movie star in Hawaii, famous for his athletic prowess and innovation in the use of the jet ski to tow surfers up to the speed they need to ride the big waves—50 feet and higher. Once driving to Hanalei, you can begin the movie family's quest anew, at Black Pot Beach. The pier at this local-boy surfer beach is also a Hollywood fave, having made appearances in three or four films. Black Pot is one of the places to learn surfing. The walk out the pier will turn shutterbugs into fiends at sunset with the surfers gliding by and the stand-up paddlers stroking for open water.

Unlike most Hawaiian beaches, where the sand is often soft and sloping, Hanalei is an excellent outing for hikers and joggers—a likely spot for our friend Clooney to have finally found that cad Brian Speer in the movie world. The cottage depicted in the film is not far down the beach from the pier. This whole zone on the north shore of Kauai is loaded with beaches, many reachable only by foot. See Kauai Trailblazer beginning on page 37 to hone in.
Email ThisBlogThis!Share to TwitterShare to FacebookShare to Pinterest
Posted by TrailblazerHawaii at 1:49 PM