Bethany Hamilton, a child prodigy as a surfer, overcame a shark attack at age 13 that left her with one arm and nearly took her life in 2003. Her 2006 biography, "Soul Surfer," was made into a major motion picture (Dennis Quaid and Helen Hunt as her parents, and Anna Sophia Robb as Bethany) that will be released tomorrow. The girl from Lihue, Hawaii, is in New York, New York, on and all-out-blitz media tour. 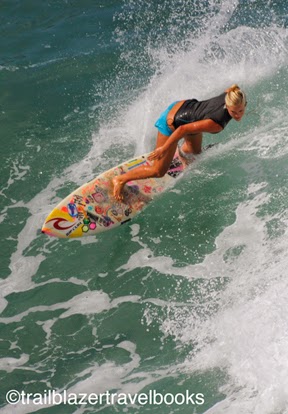 Bethany wowed surfing fans early, as an eight-year-old competitor at the Rell Sunn Surfing Invitational at fabled Makaha Beach on Oahu. That was the start of five year's of phenomenal success—until that October morning at Tunnels Beach on the North Shore of Kauai when a 14-foot tiger shark that was hunting for turtles took her arm at the shoulder instead. If the bite had been an inch higher, she would have bled out on the spot. But friends used a leash from a surfboard as a tourniquet and she was rushed across the island to a hospital—taking the place in the operating room of her father, who was scheduled for knee surgery that morning. 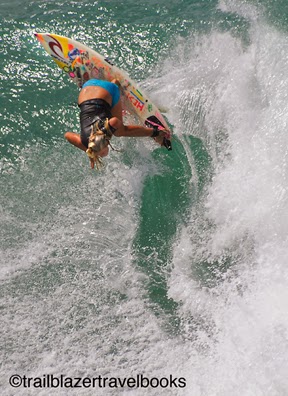 Bethany is a joy to watch—a marriage of grace and power. She is able to spot the right wave, get in position, and catch a ride with deceptive ease. Just watch the other surfers in the the same conditions, who seem to flail with much more effort to make it happen. BTW: She is not related to big-wave surfer Laird Hamilton, who is moving to Kauai from Maui.
Email ThisBlogThis!Share to TwitterShare to FacebookShare to Pinterest
Posted by TrailblazerHawaii at 8:37 AM