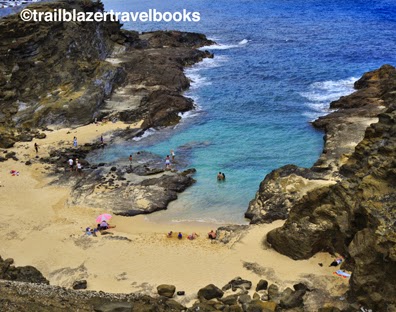 This small patch of sand notched into the lava reef of Oahu's east shore near Halona Blowhole is where Burt Lancaster rolled in the shore foam with Deborah Kerr in the 1953 movie, From Here to Eternity. The adaptation of the James Jones novel snagged 13 Oscar nominations and walked away with eight winners, including best actress, Donna Reed, and best supporting actor, Frank Sinatra. The couple's torrid roll in wet sand took only a few seconds but has lived on in perpetuity.

The beach is right below a scenic turnout that is a whale watching post. Adding to the show is the blowhole, where pressurized wave water bursts like a geyser. Anyone wishing to duplicate the movie's romantic scene is going to have a big audience. See page 92 of Oahu Trailblazer for more details on this coastline.
Email ThisBlogThis!Share to TwitterShare to FacebookShare to Pinterest
Posted by TrailblazerHawaii at 8:28 PM