Home of the Fire Goddess


Sure, it's called Hawaii Volcanoes National Park on the Big Island of Hawaii, but the government boys are itinerant renters on this land, paying dues to its fickle landlordess, Pele, the goddess of fire and volcanoes. Over the centuries, Pele has been working her way southward through the island chain, starting on Kauai, where her fiery impulses are all but forgotten in verdant valleys, to Oahu's Diamond Head, which is clearly a crater, then on to Maui's towering Haleakala, which is still considered active, and finally at her recent lodging, Kilauea Volcano, where even stodgy scientists know that on any day they may end up running for their lives from one of her temper tantrums. 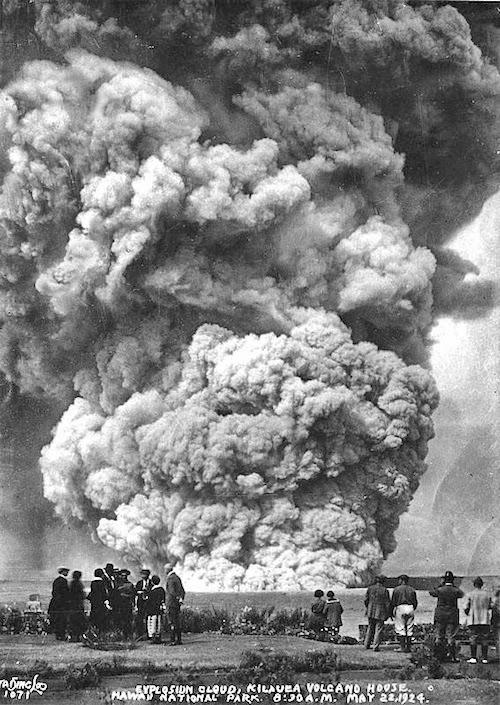 The latest outpouring of noxious gas occurred in Pele's primary residence, Halemaumau Crater, is a depression within the much larger Kilauea Crater, which itself is an opening on the east rift of the much larger Mauna Loa, a nearly 14,000-foot-high shield volcano. The 2009 burst came in the wee hours of the morning, thankfully, since no visitors were on an overlook platform that was blown to bits. Since then, vog (volcanic smog) levels have increased on the island, and have periodically closed off major sections of the park. At times within the last century or so, Halemaumau has been a "dazzling lake" of lava, and also home to sudden earth shifts that have dropped the crater floor a hundred feet or more.

Further down the east rift is Pu'u O'o, a crater that has been spewing lava since 1983, including 43 fountain bursts reaching as high as 1,500 feet. In 1997, this cone had grown to more than 1,000 feet above its opening, when a catastrophic collapse lowered the height by 825 within 24 hours. It's a long drive and possibly a long walk (depending on flows), but tourists can head out at night to see the glowing stream and falls.
Email ThisBlogThis!Share to TwitterShare to FacebookShare to Pinterest
Posted by TrailblazerHawaii at 9:16 AM