Enjoy a little Aloha from Hawaii 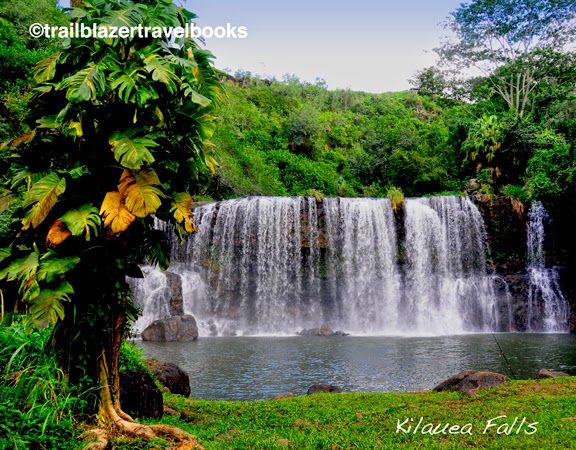 
Read it before you go and feel like a local once you get there.  Oahu Trailblazer circles the entire island and takes you to places most tourists never see.  Spot on directions, all the hiking trails and beaches listed by area with maps how to get there, best places to snorkel, kayak and surf. 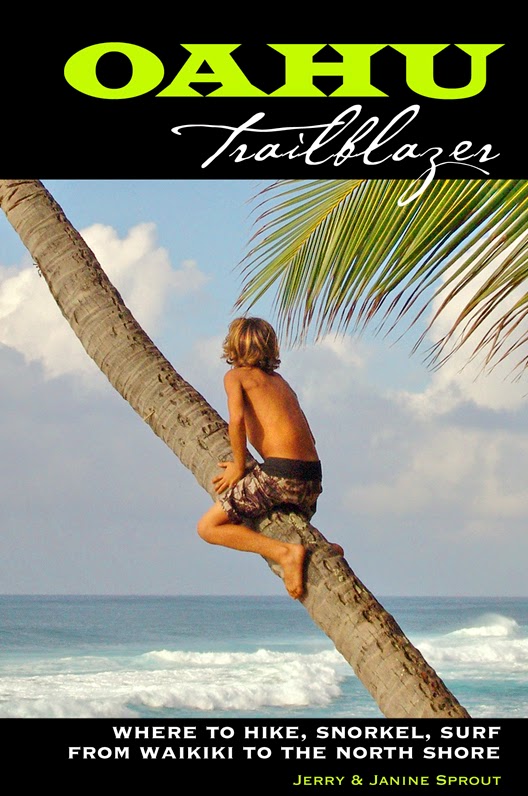 A vacation timesaver, a way to maximize every precious moment on beautiful Oahu.  Loaded with practical advice by authors who are Hawaii adventure travel specialists.
Email ThisBlogThis!Share to TwitterShare to FacebookShare to Pinterest
Posted by TrailblazerHawaii at 1:45 PM

On sunny days, things can get hectic on Kauai's north shore at the end of the road, which is both the beginning of the fabled Kalalau Trail along the Napali Coast, and the site of Ke'e Beach, a snorkeler's delight. For guaranteed quiet and beauty that shouts to the heavens, pull in about .25-mile before road's end at Limahuli Garden, one of the country's five National Tropical Botanical Gardens (three of which are on Kauai). 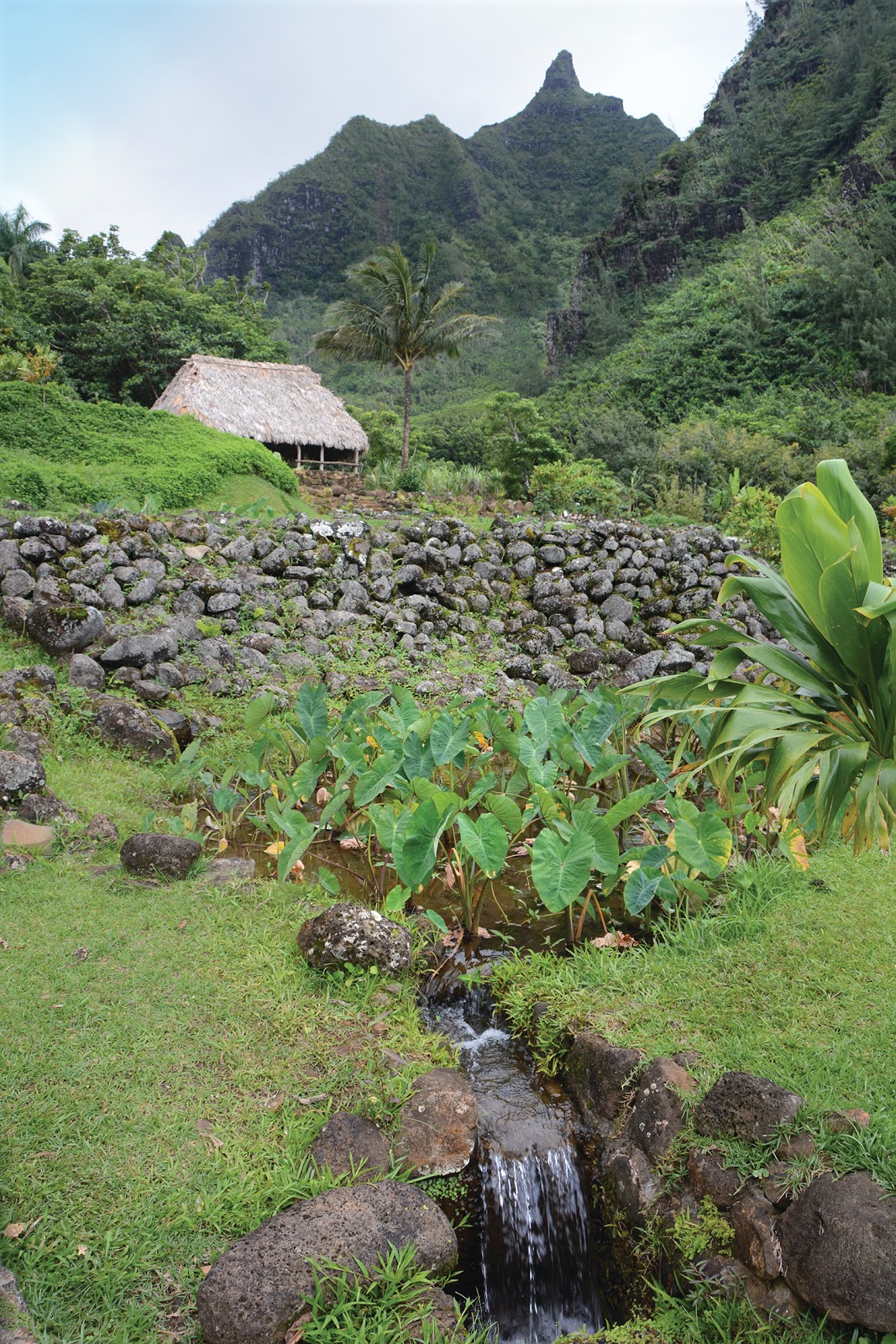 Paths wander from the Edenlike terraces of the lower gardens to upper view knolls just below the serrated ridge of Makana—called "Bali Hai" in the movie South Pacific. Both native Hawaiian plants and those brought by the voyaging Polynesians thrive here. Large mango, autograph, and other broadleaf trees shade the upper garden. A stream rushes from the valley's higher reaches. The nominal admission charge to the nonprofit garden includes a booklet that is one of the best plant books available. Page 31 of Kauai Trailblazer has more details. 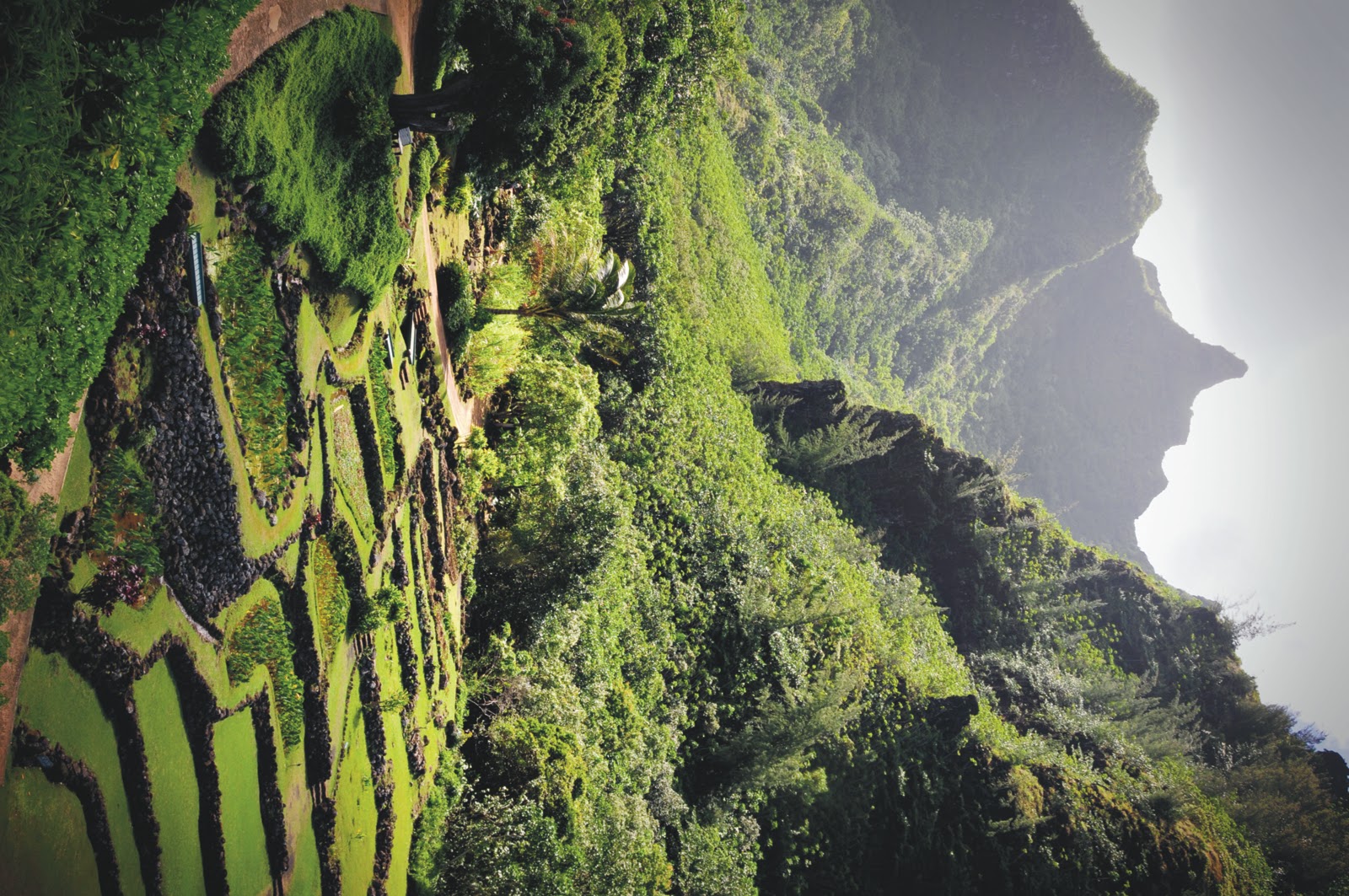 Email ThisBlogThis!Share to TwitterShare to FacebookShare to Pinterest
Posted by TrailblazerHawaii at 8:53 AM

The Bridges of Oahu's Moanaluna Valley 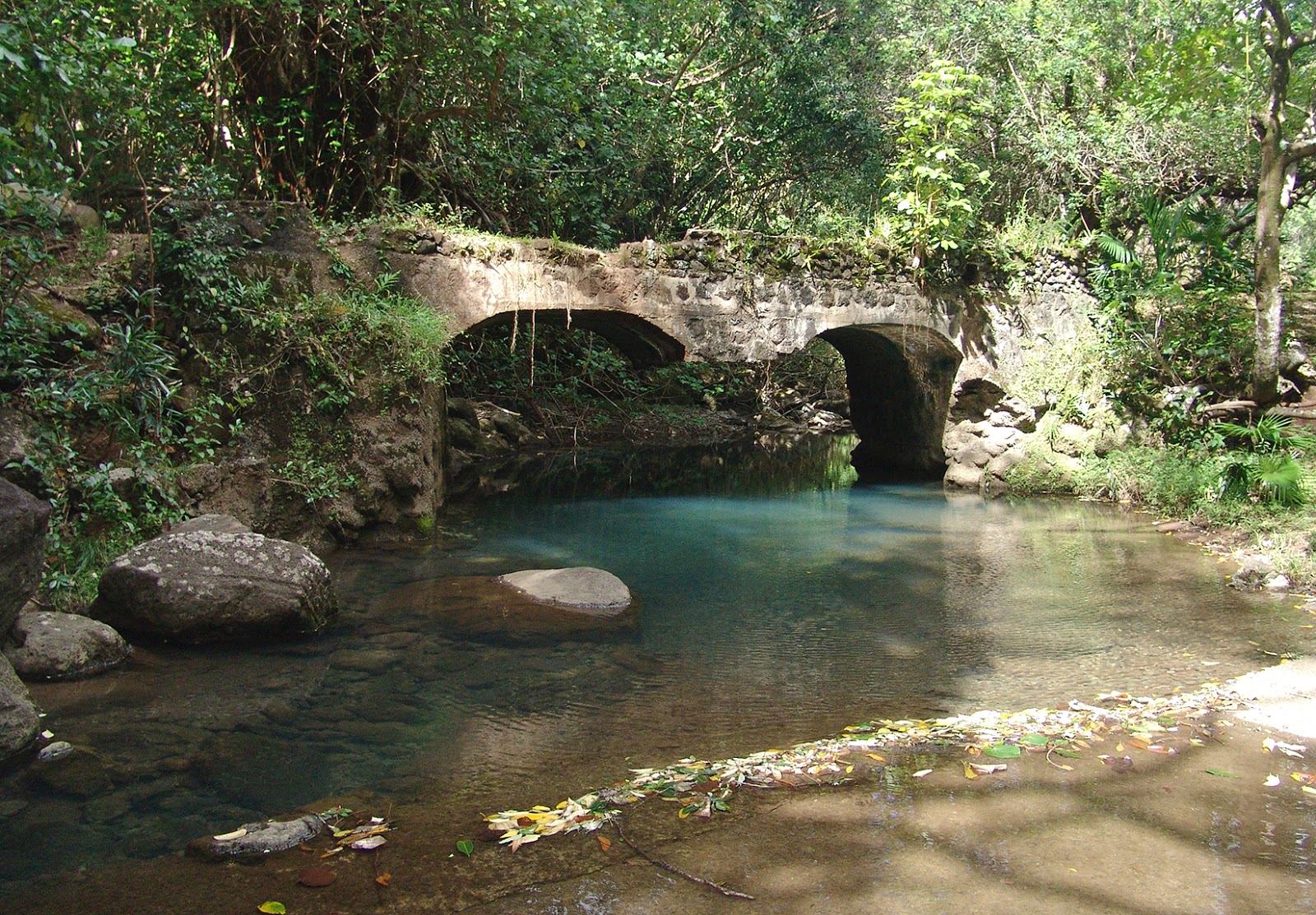 If you need proof the jungle wins in the end, take a walk across the seven stone bridges that were once part of the entranceway to a grand estate that is being swallowed up by the incessant greenery. The lush grounds at the foot of the Ko'olau Range on the west side of Oahu in 1884 were willed to Samuel Damon by Princess Bernice Pauahi Bishop (Kamehameha's granddaughter), as a "thank you" for Damon's longtime work for the the Bishop family. Damon's children built an estate in the valley, but all that's left (except the picturesque bridges) are the chimney and other ruins of a smaller home. 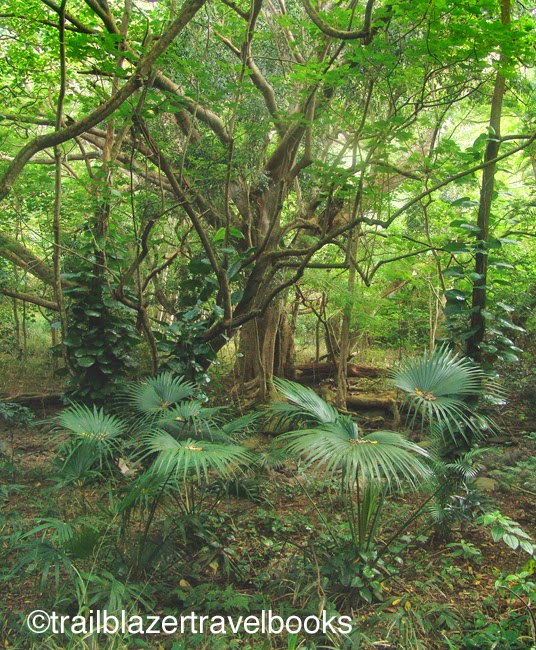 The Hawaiians, of course, lived in the Moanaluna Valley, as evidenced by konane board (like checkers) carved into a rock and other remains. Petroglyphs—rock drawings—in the valley predate even the Hawaiians and are a mystery to anthropologists. 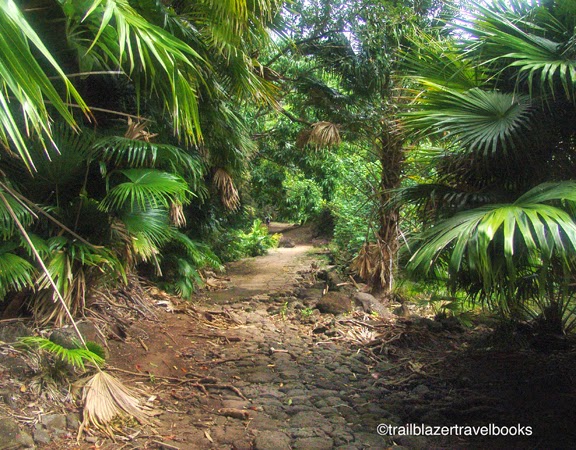 The H-3 Freeway was planned for this area, but locals were successful in getting it rerouted. The easy, stroll begins at a neighborhood park that is not far from Moanaluna Gardens. See Page 67 of Oahu Trailblazer.

Email ThisBlogThis!Share to TwitterShare to FacebookShare to Pinterest
Posted by TrailblazerHawaii at 11:52 AM


It's just as well that visiting surfers don't know about the rolling right-break into the cove at Lighthouse Beach, near Hawi on the Big Island of Hawaii: Submerged rocks lie in a few inconvenient places along the white water, making for unhealthy surfing. 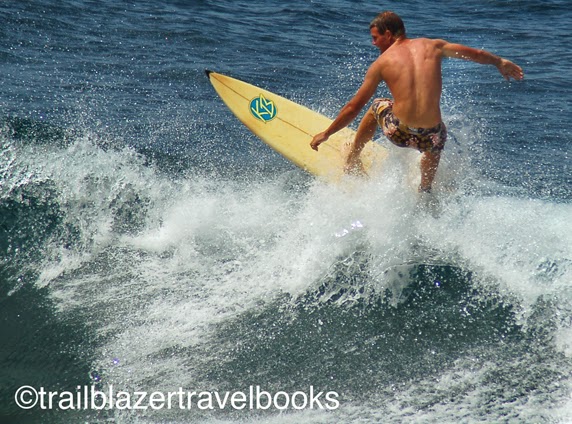 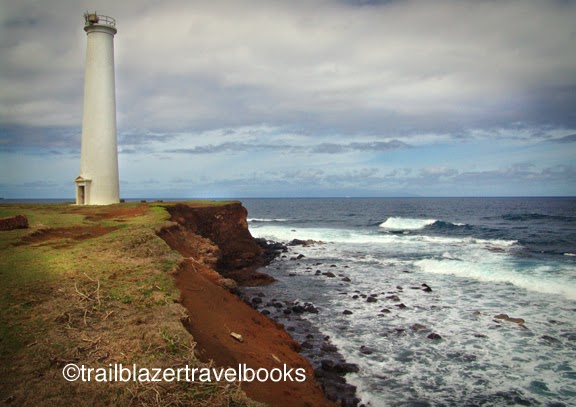 Local guys walk or drive down through pastoral slopes and ironwood groves through former cane fields. The Kauhola Point Lighthouse is the rocky northern nub of the island, a lush remnant of the Kohala volcano, about a million years older than volcanically active parts in the south, which date from yesterday. Waves break off the point into tiny Keawaeli Bay, a destination for a relaxing getaway hike. See Hawaii the Big Island Trailblazer page 37.
Email ThisBlogThis!Share to TwitterShare to FacebookShare to Pinterest
Posted by TrailblazerHawaii at 12:10 PM


Waianae on Oahu's West Side is a long way from Waikiki, literally and metaphorically, and not many tourists take the time to drive through, much less explore. But this coast is one of the most beautiful in Hawaii, and though it is a little rough around the edges, if you show a little respect for the people and hang around for a while, the place will find your heart. 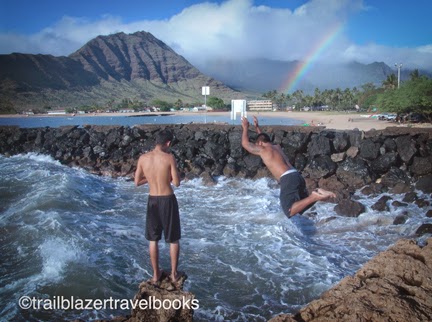 A good place to start Pokai Beach Park, in the center of the coast. A long crescent of sand, protected by a breakwater, extends from Army Beach to the park, from where a short trail leads to the terraced greenery that is the Kuilioloa Heiau (temple). From here, around 200 AD, one of the early Tahitian navigators named Pokai, set off on several round-trip voyages back to the South Pacific in open canoes, fetching the agricultural plants and livestock that were needed to establish life on the new Hawaiian homeland. The 5,000-mile excursions continue for several centuries and then ceased—leaving the Hawaiians in isolation for several more centuries until they were happened upon by Western sailing vessels.

Waianae was home to legendary slack-key singer Israel Kamakiwiwo'ole (better known as Iz)who attended the local high school. Iz died several years ago. A memorial bust can be found near the community center at 85-670 Farrington Highway. There's much more to see on the West Side. Check out pages 200-213 in Oahu Trailblazer.
Email ThisBlogThis!Share to TwitterShare to FacebookShare to Pinterest
Posted by TrailblazerHawaii at 6:33 PM 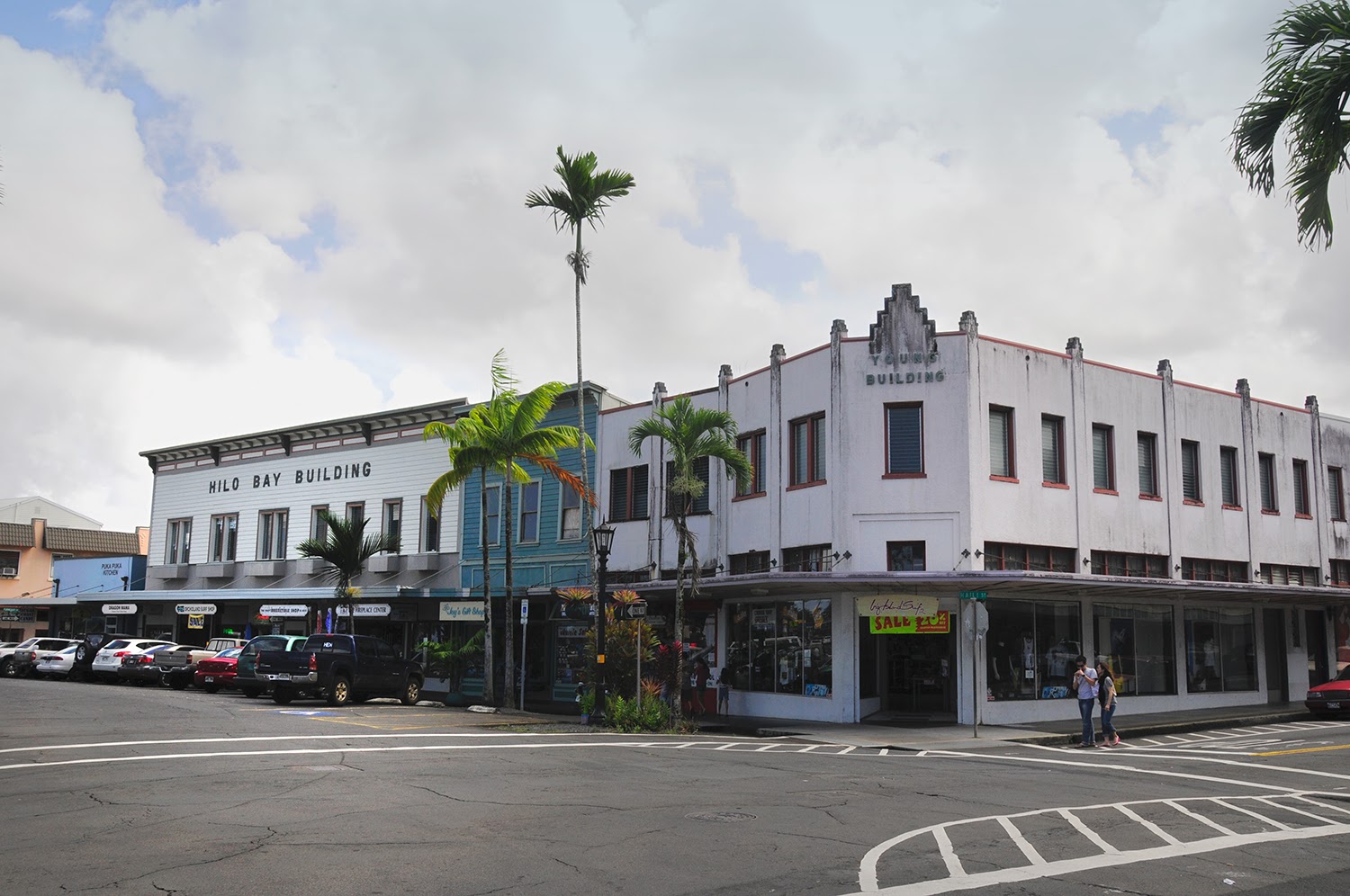 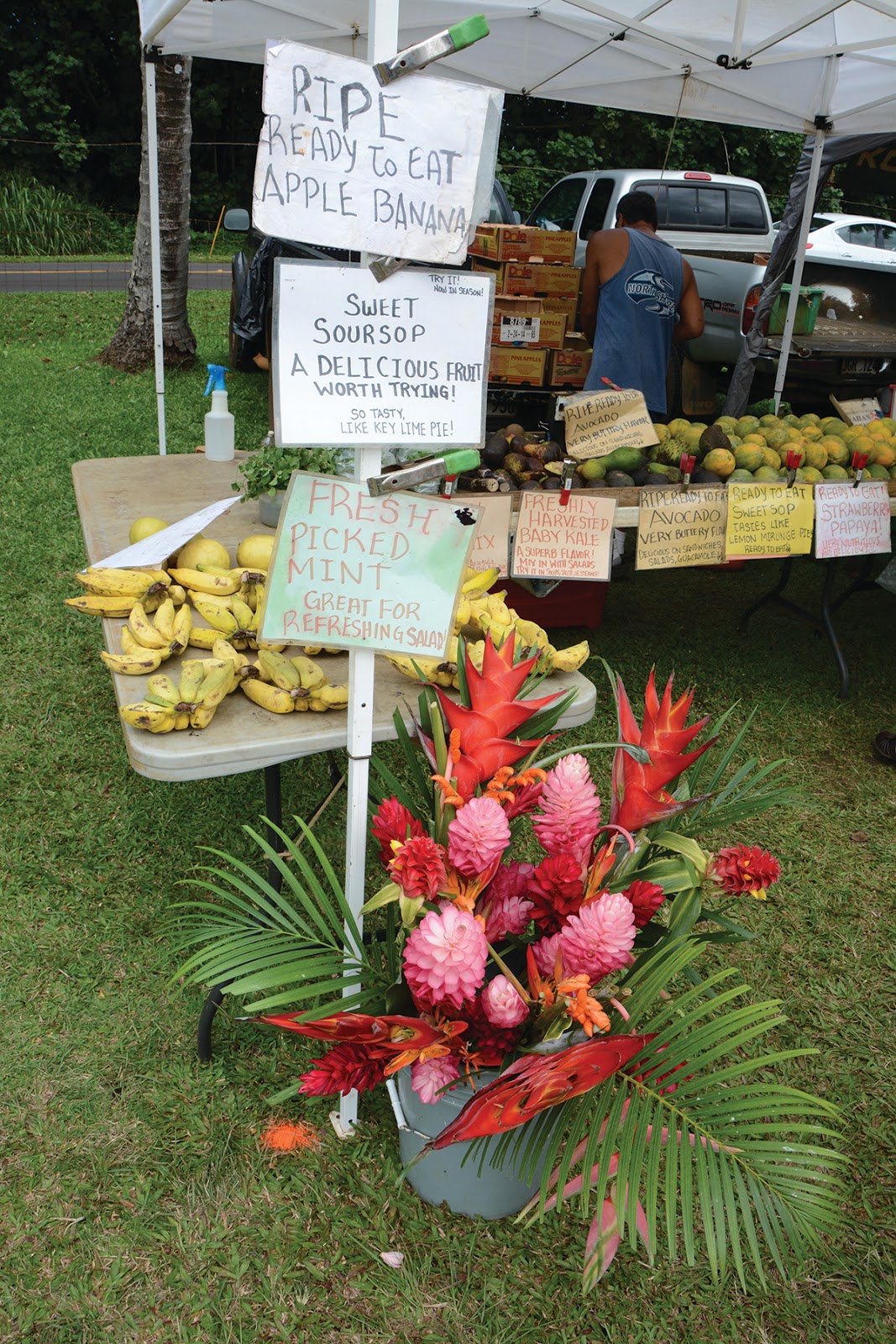 Email ThisBlogThis!Share to TwitterShare to FacebookShare to Pinterest
Posted by TrailblazerHawaii at 9:41 AM


The Kalaupapa Peninsula juts out from the north coast of Molokai, where in the 1800s Father Damien de Veuster founded a colony for islanders afflicted with leprosy.

The colony, now a National Historic Park, is reachable via a switchbacking trail (closed due to heavy rains in April, open late October 2010) that drops 1,600 feet. Molokai Stables and Damien Tours take visitors to the site.

On the other end of the island (the southeastern coast) are St. Joseph's Church, built by Damien in 1876, and, a little farther along the lazy highway, Our Lady of Seven Sorrows Church, his first effort dating from 1874. 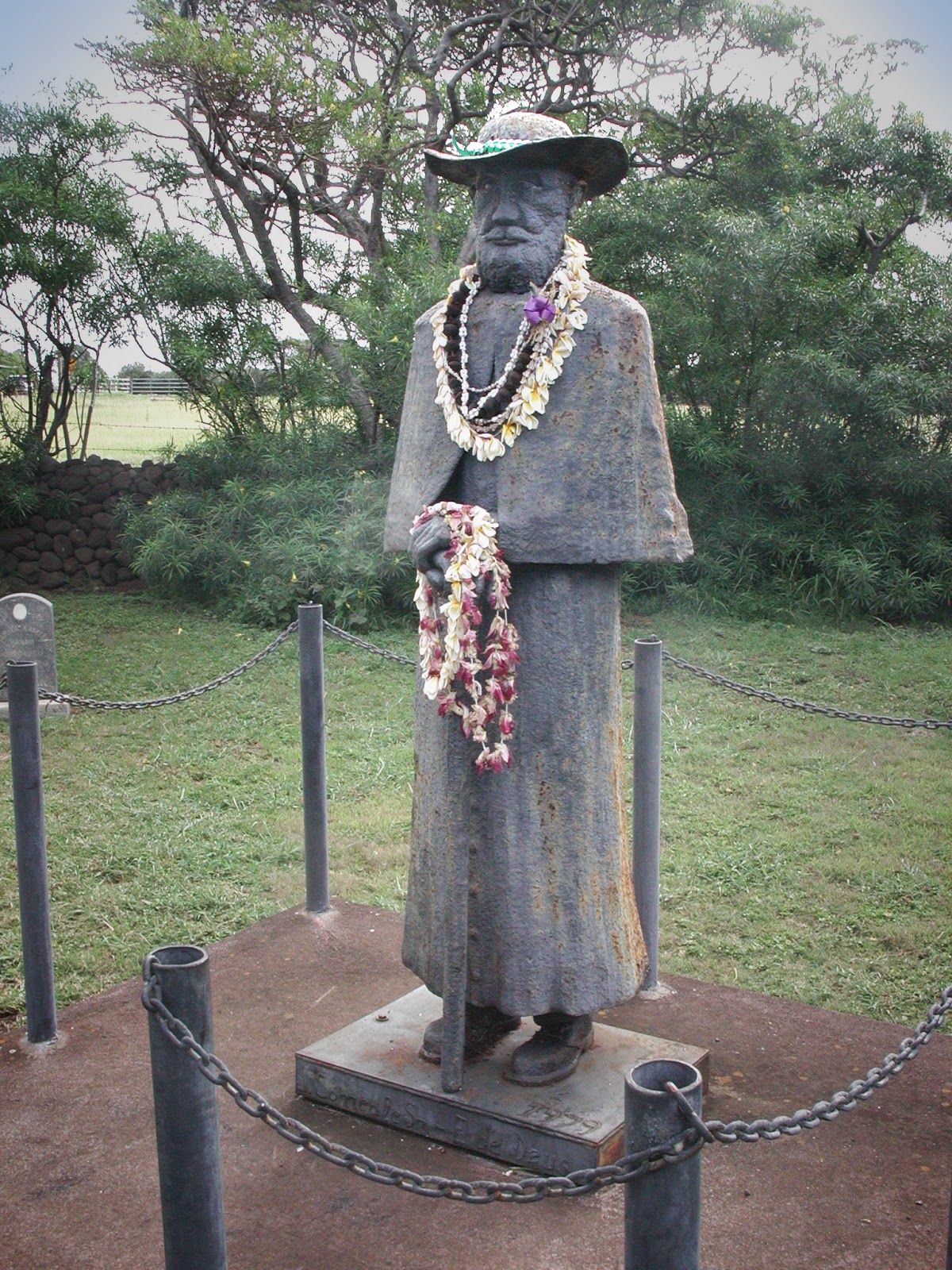 Visitors to Maui can ferry to Molokai from Lahaina. See pages 188 to 198 of Maui Trailblazer for the details of a day trip.
Email ThisBlogThis!Share to TwitterShare to FacebookShare to Pinterest
Posted by TrailblazerHawaii at 9:30 AM