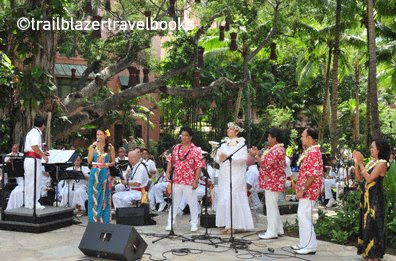 Founded by King Kamehameha III in 1836, the Royal Hawaiian Band has been playing continously, moslty on Oahu, ever since. Take that Rolling Stones. Concerts (free) often take place Fridays at noon on the grounds of Iolani Palace in Honolulu, as well as at Kapiolani Park, and at various locales in Waikiki (pictured here near the Royal Hawaiian Hotel). Hawaii's last two monarchs in the late 1800s, King David Kalakau and Queen Liliuokalani, were avid composers as well as world leaders, and thier works are played to this day.
Email ThisBlogThis!Share to TwitterShare to FacebookShare to Pinterest
Posted by Trailblazer Hawaii at 4:18 PM