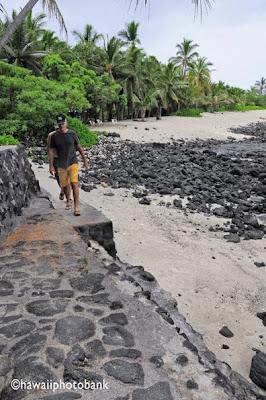 Not many visitors find little Ke’ei Village, which is down an unsigned bumpy road between the popular attractions (a state park and a national park) of Kealakekua Bay. You won’t see grass shacks, but Ke’ei is the real deal. You can walk a lane by sleepy (on weekdays) cottages, stroll a coral sand beach, and round the smooth lava of Palemano Point, the south end of the bay that bookends the Captain Cook Monument on the north end.

Not far from the point is a man-made seapool in the lava reef near a school camp. In 1782 the backshore of the village was the site of the Battle of Mokuohai, where a 24-year-old Kamehameha earned his chops, with aid of his mentor, Kekuhaupio, by outmaneuvering and defeating a stronger enemy from the Hilo side of the island. In the 1840s, Mark Twain introduced Americans to surfing by his account of village wave-riders who would “fling their boards upon a foamy crest and come whizzing by like a bombshell.” See page 97 of Hawaii the Big Island Trailblazer. 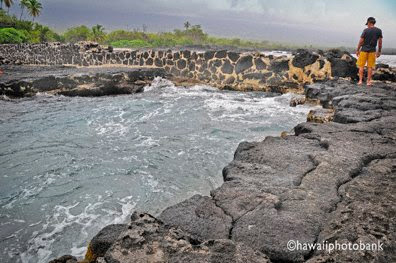 Email ThisBlogThis!Share to TwitterShare to FacebookShare to Pinterest
Posted by Trailblazer Hawaii at 4:37 PM