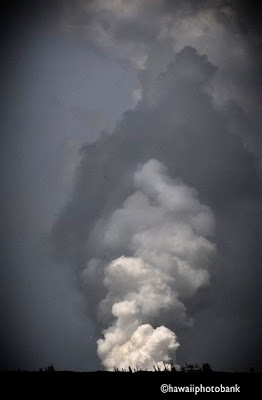 Red hot lava flowing from the Pu’u O’o eruption of the Kilauea Volcano eventually meets the cool Pacific near Kalapana Bay in Puna, sending a towering plume of toxic steam into the heavens: Creation begins anew. To see the flowing lava, tourists have been flocking to an access road in Kalapana during the early evenings (from 5 to 10), which has put a strain on the small community that has been hit hard by the volcano.

Earlier flows during the past two decades actually filled in the bay with lava, destroyed some 200 homes, and wiped out several ancient sites. During the day, you can now walk across the lava bay to the shoreline to view the plume and see a new grove of coco palms rising from the cinder, thanks to resilient locals who have planted them. Ferns and a few ohia seedlings are also sprouting in lava cracks, revealing the process that begins life in Hawaii.
Email ThisBlogThis!Share to TwitterShare to FacebookShare to Pinterest
Posted by Trailblazer Hawaii at 8:52 PM