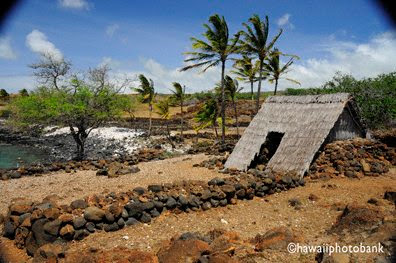 Koai’e Village, on an arid section of northwest Big Island, wasn’t prime real estate for the Hawaiians who farmed the land and harvested the sea cove here, beginning in the late 1300s. But they managed to do quite well, planting terraces that rose to the 2,000 foot level and took in nearly 300 acres, and building stone-foundation huts with classic thatched roofs and interiors made confortable by layers of woven mats. 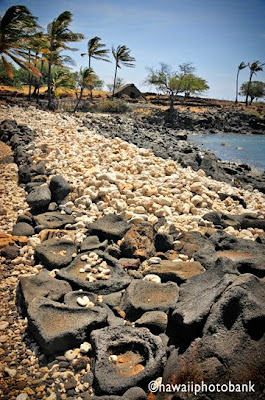 But in the 1800s, wayward cattle (introduced by seagoing Europeans) destroyed most of the agrarian way of life, and the last settler moved out in the early 1900s. The village got new life in 1966, when it became part of Lapakahi State Historical Park, the state’s first so-designated. The village layout remains intact, with several house sites, a canoe halau, a burial site, a curbed trail, and a fishing shrine. Likewise, species of vital trees, such as kukui, ki, hala, and hau, grow on the 10-acre hillside that encompasses the village.

With a little imagination (and the free park brochure) you can time travel to those years gone by—there’s no development along the coastline to spoil the reverie. The coastal section was made a marine preserve in 1979. See page 41 of Hawaii the Big Island Trailblazer.
Email ThisBlogThis!Share to TwitterShare to FacebookShare to Pinterest
Posted by Trailblazer Hawaii at 2:03 PM