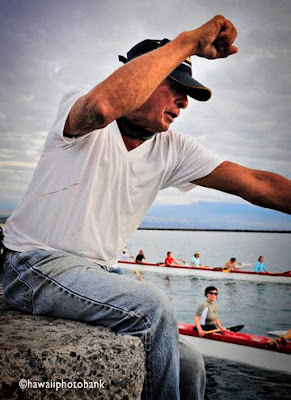 Manny Vincent is to the Kawaihae Canoe Club what Vince Lomardi was to the Green Bay Packers, although it is hard to imagine Lombardi spending thousands of hours shaping a huge koa log by hand into a sleek racing canoe and then calling the effort, “spiritual.” But, like Lomardi, Manny Vincent commands the respect and has gained the affection of his paddlers—from the kids on up to the novice adults and buffed-out pros—and his teams from sparsely populated Kawaihae Harbor in at the north end of the Big Island are often at the top, or near it, among the 75 or so clubs who compete in the state-wide Hawaiian Canoe Racing Association.

To out-stroke the red-and-white of Kawaihae, the other clubs know they have to bring their A-game. The harbor has few residents, so most of his athletes commute, the closest from Waimea, about 10 miles up the mountain. Thousands of paddlers take part in the nonprofit club sport. With many fewer people to draw from, Manny knows his crews must work harder and listen intently to his tutelage, which he has honed over some 50 years since he was a paddler on championship teams in Honolulu. He does have a bullhorn, but he also uses hand-signals to save his voice. 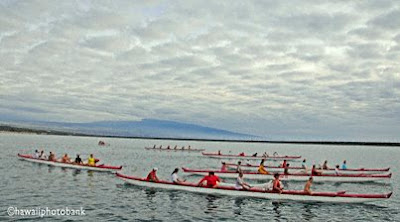 The Kawaihae Canoe Club keeps afloat from contributions, a large chunk of it coming from revenue from a yearly luau. If you’d like to send them some help, call 808-987-2819.
Email ThisBlogThis!Share to TwitterShare to FacebookShare to Pinterest
Posted by Trailblazer Hawaii at 10:46 AM