Up the lazy rivers 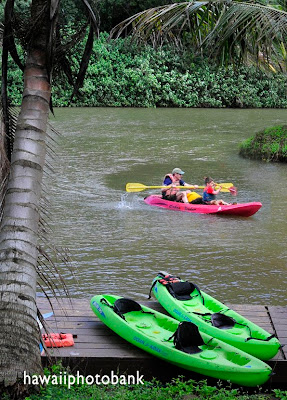 Is there any more compelling image from jungle adventure movies than paddling the still waters and lagoons of a river, swallowed by tropical greenery, eyes searching for the source of exotic birdsong? You can spend ten days or more in Kauai getting different versions of this experience on rivers and wide streams.

The most popular paddle is the Wailua River, the waterway of royalty. Several outfitters offer tours. An easy rental is from Kamokila Village, a few-mile drive inland (an ancient site that was featured in the movie Outbreak) where vessels await dockside and a short voyage takes you to Fern Grotto and Secret Falls, reachable after a short hike. Outfitters also service the north shore, on the Hanalei River into the a National Wildlife Refuge, and wide Huleia Stream, which leads from Kalapaki Bay in east Kauai past the ancient Menehune Fishpond into another NWR, shooting locale for movies like Jurassic Park and Raiders of the Lost Ark.

Independent travelers can rent a kayak and try the Hanapepe and Waimea rivers on the more arid west side, leading into red canyons. But we’re not done by a long shot. On the northeast side of the island are several slack streams that lead from beaches into the jungle: Lumahai, Kalihiwai, Anahola, and Kilauea. After these freshwater excursions, it’s time to head into the sea, but summer is a better time for that. 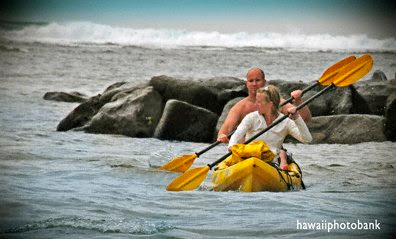 Email ThisBlogThis!Share to TwitterShare to FacebookShare to Pinterest
Posted by Trailblazer Hawaii at 11:21 AM