Limahuli, same as it ever was 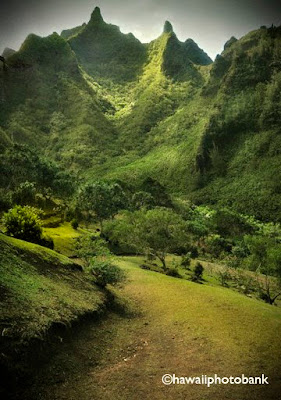 In essence, not much has changed over the last several centuries at Limahuli National Tropical Botanical Garden. To keep it that way has taken much work by dedicated people over that same period. The valley in the shadow of Makana Ridge holds all ingredients for sustainable life: trees and game in the mountains, a stream that nourishes terraced gardens, and a beach with all the fruits of the sea. In ancient Hawaii, all land was divided into villages based on these all-provided wedges of land, called an ahupua’a (ah-hoo-poo-ah-ah).

In 1875, after centuries of habitation by the Polynesian migrations, the land faced drastic change as the western world reached these shores. Fortunately, a couple dozen Hawaiian families got together and purchased the property. After a 1964 action by congress, Limahuli became one of the nation’s five tropical gardens, although it is supported through private donations and revenues from (reasonably priced) tours.

The garden features native Hawaiian plants, some of which are found only on Kauai, as well as Polynesian introductions. Find the right spot to sit in Limahuli and you see and feel time, along with a mind-boggling landscape. See page 31 of Kauai Trailblazer. 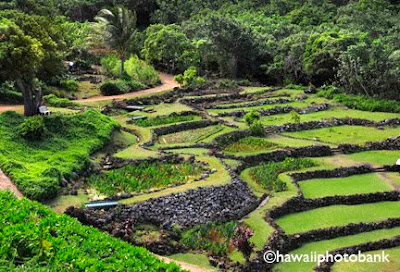 Email ThisBlogThis!Share to TwitterShare to FacebookShare to Pinterest
Posted by Trailblazer Hawaii at 11:02 AM