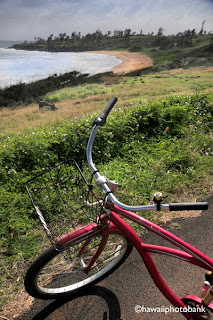 In 2008, miles of beachside trails, abandoned pineapple roads, and coastal walkways were merged into one, miles-long super-duper paved path that is a dream for cyclists, joggers and strollers. A half-dozen gleaming footbridges span canals and a dozen pavilions invite a scenic pullout.

The fun way to see the coast is to rent a snazzy beach cruiser bicycle (three-speed Treks with foot brakes and a nice cushy seat) from Coconut Coasters, located about midway in the path. Local entrepreneurs Spark and Melissa Costales opened shop about a year ago, when the multi-million dollar spruce-up was completed, and business has pedaled right on through what was a slowdown in the overall tourist economy in Hawaii. It’s the new fun thing.

Going one direction, you ride by a wild whale-watchers shoreline, pass Kealia surfing beach, and then continue past a decrepit pineapple pier to where the paved route ends at Donkey Beach, which is not reachable by car. The other way on the path leads to the backshore of Kapa’a, with family parks, low-key resorts, and family beaches. This is one of Hawaii’s most underrated and reasonably priced adventures. Many tourists drive by the storefronts of Kapa’a and don’t realize the delights of this coast, which was planted with several coconut groves by Hawaiian royalty. Plans are in the works to extend the path for a few miles on both ends, eventually connecting the airport in Lihue with Anahola, some 17 miles. 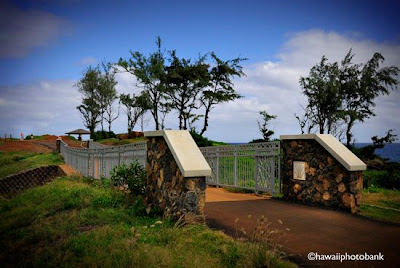 Email ThisBlogThis!Share to TwitterShare to FacebookShare to Pinterest
Posted by Trailblazer Hawaii at 11:23 AM