The EDDIE looks to be ON at Waimea 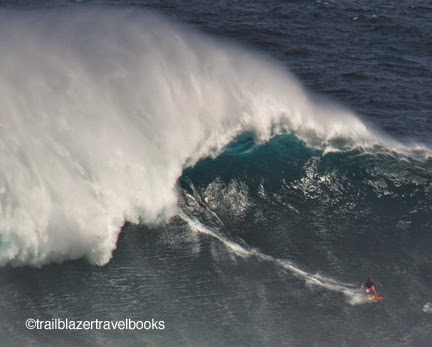 Monster waves are slated to arrive this week on the North Shore of Oahu for the Quiksilver in Memory of Eddie Aikau Big Wave Invitational (The Eddie) competition . The 2009/10 Quiksilver event will be marking its 25th anniversary. Invitees include the Irons brothers, Keaulana brothers, Jamie O'Brien, Jamie Sterling, Peter Mel, Reef McIntosh, Kelly Slater and Makuakai Rothman.


A few reports ramping up the excitement:

"A HUGE HURRICANE level storm(60+ kts+45' seas) spawns near dateline 1200 to the NW on Saturday Dec 5 and stays intense through Sunday as it tracks east. This is going to be the BIG ONE (havent seen such potential in near 10 years)... almost double the  Warning criteria of 25' faces(so potentially 30-50'); Hawaii surfers like George Downing who make the call for The Eddie will likely call it 20-30' on some top sets at Waimea. Some of its fetch is less that 400 miles out. This one is Eddie Aikau 'size'. Now the limiting factor for a 'GO' is no longer winds assoc with another front but rather sheer size. The claim is: this will be some of the biggest surf in years (even some over 30' sets are possible) and has the most potential ....for Monday, tuesday or Wednesday...esp since the last Eddie Aikau (2004, Bruce Irons)."

"The National Weather Service in Honolulu advised the Department of Emergency Management that extremely hazardous high surf could pose a threat to Oahu’s north and west facing shores beginning early Saturday and continuing through next week Wednesday.  North Shore Surf heights could build from 20 to 30-feet peaking at more than 40 to 45-feet by Monday. West facing shores will experience slightly lesser heights but the surf may still be capable of causing damage and injury."

"Additionally, a 2 ½ foot high tide early Saturday morning could combine to increase the coastal flooding potential, cause damage to homes located on or near affected beaches, create road closures and other problems and hazards."

The event is named for Eddie Aiku who drowned when paddling some 19 miles to Lanai for help during a rescue attempt. He was a crew member on the maiden voyage of the Hokulea, a replica of ancient Polynesian sailing vessels that became disabled in heavy seas. "Eddie Would Go" has become the slogan among surfers worldwide, in honor of the courageous waterman (lifeguard).
Email ThisBlogThis!Share to TwitterShare to FacebookShare to Pinterest
Posted by TrailblazerHawaii at 9:52 PM