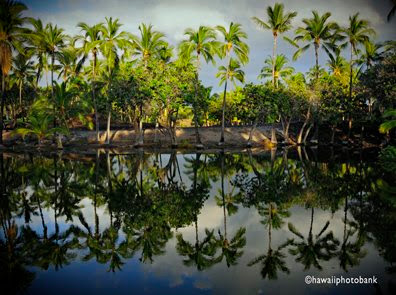 Fresh seafood was not a problem in ancient times on the Big Island of Hawaii, as the harvest was there for the taking at shoreline fishponds teeming with mullet (the “pig of the sea”) as well as shrimp, sturgeon and other delectables. On other islands, fishponds were constructed by using rocks to make artificial coves.

But on Hawaii’s west shore are anchialine ponds, where freshwater comes to the surface from underground springs, usually quite brackish from seawater intrusion. A wall was built along the shore that included a gate (makaha) of vertical branches that allowed little fishies in to feed and fatten up, at which time they were too big to swim back out. 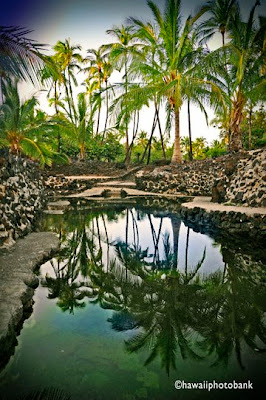 The Mauna Lani is one of Hawaii’s most desirable luxury hotels, boasting several class-A swimming beaches as well as spacious grounds that include the ponds, the remains of Kalahuipua’a Village, and Eva Parker Woods Museum, a tiny cottage run by Daniel Kaniela Akaka, Jr. On the evening of full moons, Danny (who is the son of Hawaii’s longtime senator) holds a “Talk Story” gathering of cultural entertainment that brings a crowd from miles around.
Email ThisBlogThis!Share to TwitterShare to FacebookShare to Pinterest
Posted by Trailblazer Hawaii at 10:19 AM