The hinterlands of Pololu 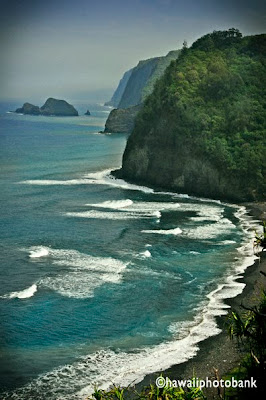 Kohala is closer to Maui’s Hana than to the south end of the Big Island, to which it is attached, an anomalous green nub that a million years ago was a separate Volcano. (The Big Island is comprised of what were once five separated volcanoes.) The years have been kind to Kohala, as wind, rain, and waves have etched valleys, ridges, and waterfalls.

The coastline is roadless, ending on the northeast at Waipio Valley and on the northwest at Pololu Valley. Plenty of cars jam the ill-designed overlook of Pololu for the cover-girl photo op and a chat with basket weavers who are truly ambassadors of aloha. And some visitors brave the bumpy, switchbacking trail that drops some 400 feet over less than a mile to the stream and rough beach on the valley floor. 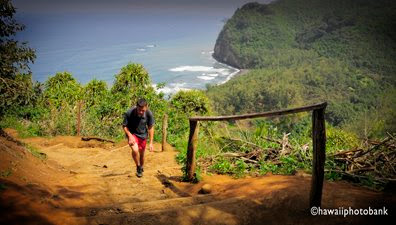 But the crowds thin drastically from there, and few venture on the (unsigned) trail from the end of the beach, the start of a tropical ridge-and-valley escapade that is among Hawaii’s best adventure hikes. The next two valleys—Honokane Nui and Honokane Ike—can be gained with about six more miles and 2,000 feet of effort, with a reward of wild streams, slap-face views, ancient ruins, and a garden of pandanus and other tropical flora. From Honokane Iki the going gets very rough, especially since the 2006 earthquake, and tourists don’t want to brave the 20-mile trek to the Muliwai Trail that ends at Waipio, penetrating tangled wilds rumored to be home to “torchlight marchers,” warriors from days gone by. See page 35 of Hawaii the Big Island Trailblazer.
Email ThisBlogThis!Share to TwitterShare to FacebookShare to Pinterest
Posted by Trailblazer Hawaii at 12:51 PM