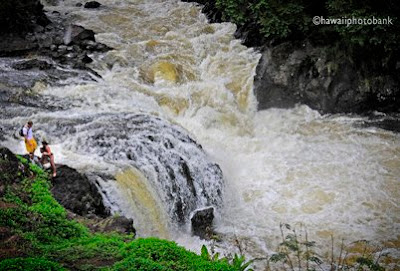 Lava isn’t the only dangerous element flowing from the mountains in Hawaii—cloudbursts create flash floods in streambeds and have racked up more fatalities than the combined forces of eruptions, tsunamis, and hurricanes. The Wailuku River (translated as “destructive waters”) gathers runoff from the saddle between Mauna Loa and Mauna Kea, the world’s tallest mountains as measure from their underwater bases to their peaks, and sends a torrent screaming through bedrock into Hilo Bay. Wailuku River State Park features two falls popular on the tour-bus circuit. 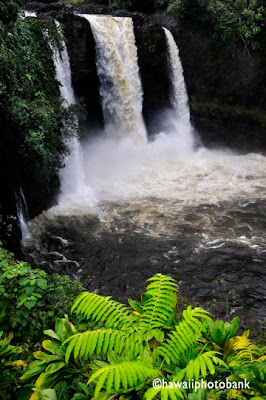 Rainbow Falls, a wide 80-footer, has a huge pool and a cave behind the water curtain, where in ancient times the demigod Maui saved his mother, the goddess Hina, from the giant eel-lizard Mo’o Kuna. On calm days, local kids swim at pools above the falls. Swimmers also like the pools called Boiling Pots that are in the bedrock canyon below Pe’epe’e Falls, which is just up the road. But when the falls are pumping, the pots are a caldron and anyone with brains stays well back.
Email ThisBlogThis!Share to TwitterShare to FacebookShare to Pinterest
Posted by Trailblazer Hawaii at 10:39 AM