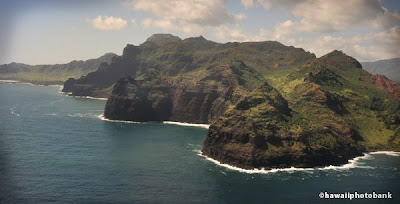 Here's an aerial view of Kipu which is situated at the mouth of Nawiliwili Harbor. Experienced kayakers put in at Kawailoa Bay and head to the left around the point to Kipu Kai Beach which is not accessible by land to the public. It is forbidden to trespass past the beach. The ranch is owned by the heirs of William Hyde Rice, son of Protestant missionaries and the last governor of Kauai under Queen Liliuokalani. Towered over by the majestic Haupu Mountain Range (Hoary Head Ridge), the working cattle ranch has been the backdrop for Hollywood films such as Raiders of the Lost Ark, Islands in the Stream, The Hawaiians, Mighty Joe Young, Outbreak, Diamond Head the the sequel to Jurassic Park, The Lost World.

You can drive to the ranch entrance to view the Rice Memorial erected by Japanese workers after the plantation owner's death. A stately row of tall Norfolk pines line the road. On the way to the memorial, before the road crosses a one lane bridge, you can take a side-trip to Kipu Falls, a favorite swimming hole among locals. A fifteen-foot high cascade fills the pool and a rope swing challenges the daring-do.
Email ThisBlogThis!Share to TwitterShare to FacebookShare to Pinterest
Posted by Trailblazer Hawaii at 11:49 AM